The Book of Rick: Part One, Living with Contradictions by Rick Landman 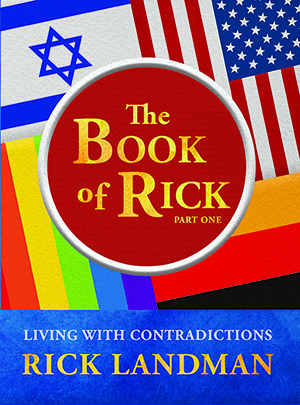 This paperback book will be printed in-store on our Espresso Book Machine and should be ready within one business day.

Being born in NYC before the U.S. Supreme Court case of Brown v. Board of Education, my public school and neighborhood were totally segregated. The "separate but equal doctrine" was the law of the land, which meant that Jews, Irish and Italians Catholics could live in my neighborhood, but no one with darker skin.

In 1965, at the age of twelve, I started to come out. At that time openly gay people were considered mentally ill criminals, so becoming a teacher or lawyer was not going to be easy. But I persevered, obtained 5 degrees, and eventually became a professor and an attorney fighting discrimination.

Now add that I was an American son of grateful German Jewish refugees who fled Nazism in 1939, but had to leave the rest of their family behind to die, because of America's restrictive immigration laws at that time. My father was both an 18-year-old inmate of Dachau after Kristallnacht, as well as being a U.S. soldier when Dachau was liberated. My family is full of contradictions and coincidences.

"You bring great honor to all those relatives of yours who were murdered. And great honor to your parents who made it to these shores. I am so proud of you. CBST is so lucky to have you as a part of our community."
Rabbi Sharon Kleinbaum, Congregation Beil Simchat Torah, NYC