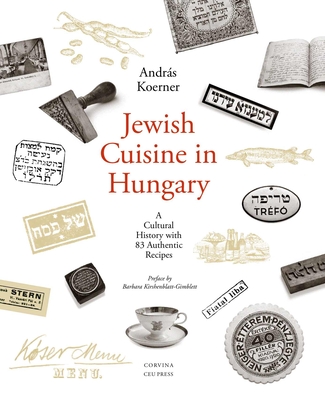 By András Koerner
Please email or call us for pricing on this book.

Winner of the 2019 National Jewish Book Award in the category of Food Writing & Cookbooks.

The author refuses to accept that the world of pre-Shoah Hungarian Jewry and its cuisine should disappear almost without a trace and feels compelled to reconstruct its culinary culture. His bookwith a preface by Barbara Kirshenblatt-Gimblettpresents eating habits not as isolated acts, divorced from their social and religious contexts, but as an organic part of a way of life.

According to Kirshenblatt-Gimblett: "While cookbooks abound, there is no other study that can compare with this book. It is simply the most comprehensive account of a Jewish food culture to date." Indeed, no comparable study exists about the Jewish cuisine of any country, orfor that matterabout Hungarian cuisine. It describes the extraordinary diversity that characterized the world of Hungarian Jews, in which what could or could not be eaten was determined not only by absolute rules, but also by dietary traditions of particular religious movements or particular communities.

Ten chapters cover the culinary culture and eating habits of Hungarian Jewry up to the 1940s, ranging from kashrut (the system of keeping the kitchen kosher) through the history of cookbooks, the food traditions of weekdays and holidays, the diversity of households, and descriptions of food and hospitality industries to the history of some typical dishes. Although this book is primarily a cultural history and not a cookbook, it includes 83 recipes, as well as nearly 200 fascinating pictures of daily life and documents.