Pakistan in the Eye of a Thunderstorm: Military, Secret Agencies and Politics of Alliance Making (Paperback) 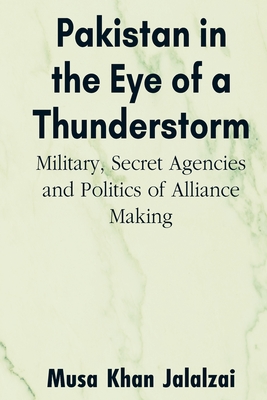 By Musa Khan Jalalzai
Please email or call us for pricing on this book.

Collaboration of Pakistan army, Inter-Services Intelligence (ISI) and civilian agencies in mollycoddling and wrecking image of Pakistan in international community raised several questions, including the political involvement of the country's army in politics and alliance making. In the past 72 years, Pakistan army came on the scene for the first time at a crossroad and failed to go back or take another road. Its consecutive martial law regimes mentally, physically and officially promoted a militarised culture of intelligence and brutally murdered civilian culture of intelligence in the country. The army and ISI role against the government of Imran Khan has been contradictory and underwhelming. On 12 May 2022, Maryam Nawaz warned that Army Chief Qamar Bajwa needed to have a flawless image. She criticised the jihadist general and former Chief of ISI Faiz Hameed for his political role in orchestrating her conviction in a corruption case. The Inter-Services Intelligence and Military Intelligence lack of trust has been a longstanding concern in civilian circles. Writers and intellectuals in their forums have raised the question of public confidence. Majority members of intelligence agencies of the country are associated with different sectarian, ethnic, political and jihadist groups. They disclose important security and intelligence information to these entities and sects. This illegal affiliation also directed intelligence operations on sectarian and ethnic bases. Poor data collection with regard to the activities of militant sectarian organisations and their networks across the country is a challenging problem. The number of reports and recommendations to improve intelligence agencies' performance and operational mechanism has remained only on paper, while agencies didn't allow changing their manner of operation. On matters of foreign affairs and intelligence, the ISI and civilian intelligence failed to create a friendly environment with neighbouring states, while intelligence related to national security is marked more by failures than successes is a sad reality.