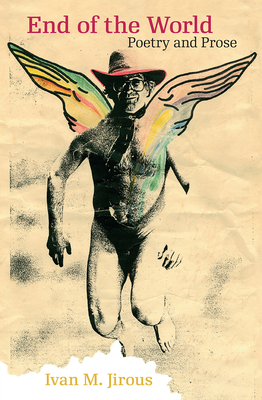 Sometimes called the Czech Bukowski, and more widely known by the epithet “Magor” (which translates roughly to “fool” or “madman”), Ivan Jirous was one of the most significant figures in the Czechoslovak cultural underground of the 1960s through the '80s.  Although trained as an art historian and famed for his poetry, Jirous was convinced that it was actually rock and roll music that held the greatest potential to enact change under the repressive regime of communist Czechoslovakia. He designated himself as the artistic director of the dissident rock band The Plastic People of the Universe, legendary for psychedelic music that was heavily influenced by nonconformist Western acts like Frank Zappa and The Velvet Underground. Alongside other figures from the musical underground, Jirous was arrested in 1976—the second of five prison sentences he would serve for his dissent—which helped bring about the landmark civil rights initiative known as Charter 77. In the wake of 1989’s Velvet Revolution, Váсlav Havel—the first president of the Czech Republic—was to say that Jirous and his unwavering commitment to liberation played “no small part” in casting off the yoke of Soviet oppression.

End of the World is the first major collection in English of the works of this legendary Czech “madman.” Although nicknamed for his aggressive and rebellious behavior, Jirous’s writing reveal a refined, sophisticated, and even tender sensibility. Translated in part by Paul Wilson, an original member of the Plastic People, the book gathers his poems and letters from prison, as well as his book-length prose work, The True Story of the Plastic People, alongside critical essays on Jirous’s life and work. End of the World is an ideal introduction to the raucous writer who playwright Tom Stoppard referred to as one of the most interesting personalities in modern Czech history.

Ivan M. Jirous (1944 – 2011) was a Czech dissident, critic, essayist, and poet. Along with Václav Havel, Ivan “Magor” Jirous was one of the most important dissident figures in Communist Czechoslovakia, but where Havel represented the intellectuals and writers, Jirous as artistic director of The Plastic People of the Universe, represented the underground rock scene. The alliance Havel and Jirous formed in 1976 would soon lead to Charter 77, when Jirous and members of The Plastic People were arrested. Jirous would go on to serve five different prison sentences during communism. For the book of poetry he wrote in prison, Magor’s Swan Songs, Jirous was awarded the Tom Stoppard Prize in 1985.

Paul Wilson is a renowned Canadian-born translator of Czech and former member of The Plastic People of the Universe.

Justin Quinn is a lecturer in the Department of English at the University of West Bohemia and a poet, critic, and translator.

Timothy West is a translator of Czech.