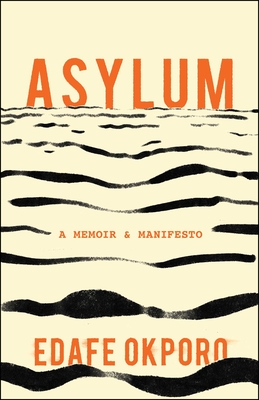 On the eve of Edafe Okporo’s twenty-sixth birthday, he was awoken by a violent mob outside his window in Abuja, Nigeria. The mob threatened his life after discovering the secret Edafe had been hiding for years—that he is a gay man. Left with no other choice, he purchased a one-way plane ticket to New York City and fled for his life. Though America had always been painted to him as a land of freedom and opportunity, it was anything but when he arrived just days before the tumultuous 2016 Presidential Election.

Edafe would go on to spend the next six months at an immigration detention center in Elizabeth, New Jersey. After navigating the confusing, often draconian, US immigration and legal system, he was finally granted asylum. But he would soon realize that America is exceptionally good at keeping people locked up but is seriously lacking in integrating freed refugees into society.

Asylum is Edafe’s “powerful, eye-opening” (Dr. Eric Cervini, New York Times bestselling author of The Deviant’s War) memoir and manifesto, which documents his experiences growing up gay in Nigeria, fleeing to America, navigating the immigration system, and making a life for himself as a Black, gay immigrant. Alongside his personal story is a blaring call to action—not only for immigration reform but for a just immigration system for refugees everywhere. This book imagines a future where immigrants and asylees are treated with fairness, transparency, and compassion. It aims to help us understand that home is not just where you feel safe and welcome but also how you can make it feel safe and welcome for others.

Edafe Okporo was born in Warri, Nigeria. He migrated to the United States in 2016 as an asylum seeker and is now a refugee of the United States. Edafe is a global gay rights activist, the founder of Refuge America Inc, and one of the country’s most visible voices on the issue of displacement, leading an organization with a vision to “strengthen as a place of welcome for LGBTQ displaced people.” A graduate of Enugu State University and the school of Business at NYU, he currently lives in New York City. Edafe is among the inaugural winners of the David Prize, which honors individuals with bold visions for creating a better and brighter New York City. He is also a Logo 30 Honoree.

“Powerful, honest, and deeply moving, Edafe Okporo’s Asylum is a must-read. From dealing with unimaginable persecution to transforming the lives and hearts of countless people, Edafe lets us in, offering us an intimate look into his journey and the realities of so many.”—Elliot Page, actor

“Both memoir and a call to action, Edafe Okporo’s book is a powerful, eye-opening story of his escape from persecution as a gay man, a heartbreaking yet hopeful illustration of the unique challenges faced by queer refugees around the world.”—DR. ERIC CERVINI , New York Times bestselling author of The Deviant’s War

“Through the fires of persecution and exile, Edafe Okporo found liberation. Written with urgency and insight, Asylum is a moving and dramatic account of a gay Nigerian’s search for his place in the world, a book that reminds us that so many queer folks around the world have yet to achieve their freedoms.”—DAVID EBERSHOFF, New York Times bestselling author of The Danish Girl and The 19th Wife

"A deeply affecting account...readers will be galvanized by this resounding call for equality."—PUBLISHERS WEEKLY

“A riveting contribution expanding the literature of U.S. immigration to include the experience of a gay Nigerian man. Okporo’s story clarifies the necessary role that community-based LGBT and refugee support groups play in supplementing the bureaucratic brutality facing America’s new arrivals. Vulnerable, informative, and compelling, this book will appeal to professionals, scholars, and general readers open to the stories of our times.”—SARAH SCHULMAN, author of Let the Record Show

“All of us who are LGBTQ find ourselves on a journey to understand our identities and our place in the world. For Edafe Okporo, as he so movingly shares in Asylum, that journey was a perilous odyssey that almost cost him his life in his home country of Nigeria and landed him behind bars when he fled to the U.S. A role model of big-hearted resilience and determination for us all.”—ERIC MARCUS, founder and host, Making Gay History podcast

“Edafe Okporo provides a gripping account of his persecution in Nigeria for being a gay man and six months of immigration detention in the U.S. Eventually winning asylum, he goes on to lead an organization that provides shelter to refugees. Okporo’s narrative is beautifully told, a story of perseverance, faith, and grace.”—ALEX ALEINIKOFF, director of the Zolberg Institute on Migration and Mobility

"A riveting memoir and an essential immigrant and a gay story. Edafe's story is not just a longing for a better life only, it is also an effort to break free from a society that sees him unfit. Yet his struggle to fit in continues as he settles into his new permanent home in the U.S. Absolutely remarkable and engaging."—ABDI NOR IFTIN, author of Call Me American
"In an evocative, heart-wrenching book, Okporo deftly blends his personal story with a searing critique of the asylum process in the U.S. At every turn, Okporo's story reveals the injustices and inhumanities asylum-seekers face just by showing what he endured. The result is a highly readable, thoughtful book that questions whether the U.S. asylum process is guided by morals or money, and convincingly argues that the people most affected by immigration policies must be heard. This compelling book will stay with me."—JESSICA GOUDEAU, author of After the Last Border: Two Families

"Asylum offers a gripping, necessary, and tender portrait of growing up gay in Nigeria. From the trials of violence, humiliation, and living in hiding, to the Kafka-esque detention system for refugees seeking asylum in the US, Edafe Okporo exposes what is lost and what is gained on the road to community, love, and radical self acceptance. I couldn't put it down."—JENN SHAPLAND, National Book Award finalist for My Autobiography of Carson McCullers