Our American Friend: A Novel (Paperback) 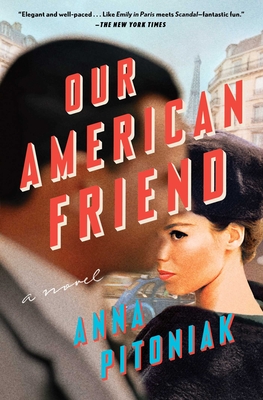 “Emily in Paris meets Scandal” (The New York Times) in this propulsive Cold War-era political thriller as one intrepid journalist writes the official biography of the mysterious First Lady—uncovering secrets that could destroy them both.

Paris, 1974. Lara Orlov and her family arrive from Moscow at the height of the Cold War, thanks to her father’s position as a diplomat. The years pass, and Lara becomes more and more enamored with the City of Lights. As a teenager in Paris, she falls deeply in love with a fellow Russian expat: the passionate, intellectual Sasha, who opens her eyes to the ills of the Soviet Union.

Decades later, and across the globe, journalist Sofie Morse is taking some much-needed time off after several chaotic years covering Washington politics. But when she gets a call from the office of First Lady Lara Caine, her curiosity is piqued. Sofie, like the rest of the world, knows little about Lara—only that she was born in Soviet Russia and raised in Paris before marrying Henry Caine, the brash future president.

Lara asks Sofie to write her official biography. After decades of silence, she is finally ready to speak candidly about her past: about her father’s work for the KGB, and about her ill-fated relationship with Sasha—which may be long in the past, but which could have explosive ramifications for the future. As Lara’s story unfolds, Sofie can’t help but wonder: why is she revealing such sensitive information? And why now? Caught in a dangerous game of cat-and-mouse, both Lara and Sofie must ask themselves what really matters—and confront their own power to upend the global political order.

Anna Pitoniak is the author of Necessary People and The Futures. Before becoming a full-time author, she worked in book publishing, including as a senior editor at Random House. Anna grew up in Whistler, British Columbia. She graduated from Yale, and lives in New York City.