Bride of the Sea (Paperback) 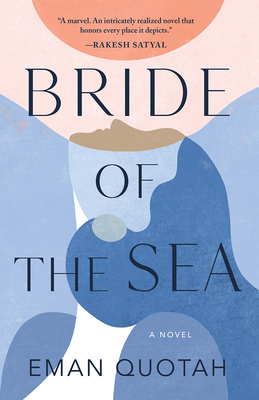 Shortlisted for the 2022 William Saroyan International Prize for Literature

“A marvel. An intricately realized novel that honors every place it depicts.” —Rakesh Satyal

During a snowy Cleveland February, newlywed university students Muneer and Saeedah are expecting their first child, and he is harboring a secret: the word divorce is whispering in his ear. Soon, their marriage will end, and Muneer will return to Saudi Arabia, while Saeedah remains in Cleveland with their daughter, Hanadi. Consumed by a growing fear of losing her daughter, Saeedah disappears with the little girl, leaving Muneer to desperately search for his daughter for years. The repercussions of the abduction ripple outward, not only changing the lives of Hanadi and her parents, but also their interwoven family and friends—those who must choose sides and hide their own deeply guarded secrets.


And when Hanadi comes of age, she finds herself at the center of this conflict, torn between the world she grew up in and a family across the ocean. How can she exist between parents, between countries?

Eman Quotah’s Bride of the Sea is a spellbinding debut of colliding cultures, immigration, religion, and family; an intimate portrait of loss and healing; and, ultimately, a testament to the ways we find ourselves inside love, distance, and heartbreak.

Eman Quotah is Arab-American, and writes for a Washington, DC, think tank. Her father is from Saudi Arabia and her mother is from the United States; she grew up in both countries and is fluent in Arabic. Eman was named John McClelland Historical Writing Resident by the Espy Foundation.

Engrossing. . . . [offers] Americans a nuanced view of the Saudi Kingdom through a cast of compelling characters and a sweeping plot that spans continents and decades. . . . Quotah’s perspective is an important addition to American fiction.
— The Washington Post

Intertwines the dissolution and reconstruction of a single family with the evolving histories of the United States and Saudi Arabia. Eman Quotah deftly spans decades, miles, and cultures—and ultimately tells more stories within her 312 page debut than some authors tell across their entire careers. . . . In its most shining moments, Bride of the Sea displays the breadth and scope of grand family epics such as Min Jin Lee’s Pachinko, as we see a family move in rhythm with a larger history.

A sensitive portrayal of becoming American—both the shedding of one's culture for the sake of fitting in and the difficult task of finding one's place, especially as an Arab American. . . . A clear-eyed debut from a writer who doesn't shy away from the messiness of family life.
— The Star Tribune

A fast-paced, beautiful saga of family and identity. It is also a deep, immersive dive into the world of women and the choices they make when constrained by family and expectations.
— Washington City Paper

Precisely observed. . . . Quotah has as keen an eye for the quirky details of life in Cleveland or Toledo as well as those of Jidda, where society is impacted by the Americans involved in Operation Desert Storm and by the rapidly changing roles of women. She surrounds her exploding nuclear family with dozens of other fully realized characters, setting their drama in the context of larger social and political movements both in Saudi Arabia and in the United States. The author handles thorny issues with a light touch as she explores how her fallible characters are shaped by and react to two very different environments.
— Columbus Dispatch

Bride of the Sea features a description of Saudi Arabia and its culture in a way that is not often seen in media form. She describes many aspects of the culture—from food, clothing, values, and everyday living—with a neutrality that portrays it as just that: people's cultures. She does not employ the common tone that seeks to paint Saudi culture as "savage" or "backwards" . . . . Quotah keeps readers spell-bound.

A spellbinding debut of colliding cultures, immigration, religion, and family; an intimate portrait of loss and healing, and ultimately, a testament to the ways we find ourselves inside love, distance, and heartbreak.
— Priyanka Chopra

A beautifully intricate family drama about a young woman torn between her parents and two worlds.
— PopSugar

From one generation to the next, and from the Arabian Peninsula across America and back, Quotah’s story offers a kaleidoscopic perspective on the weight of cultural traditions and obligations at home and abroad.
— Washington Independent Review of Books

"In her strong debut, Quotah spans the post-9/11 decades and locates her well-developed characters in both Saudi Arabia and Cleveland. . . . Quotah's family saga effectively captures the struggles of immigrants straddling two cultures, while reiterating beautifully the imperfections of all families characterized by loss, betrayal, and secrets."
— Library Journal

Quotah’s deft characterization and pacing, combined with an inside look at Saudi Arabian life, make this debut a compelling and worthy read.
— Booklist, Starred Review

Bride of the Sea is a gem.

A spellbinding debut of colliding cultures, immigration, religion and family; an intimate portrait of loss and healing; and, ultimately, a testament to the ways we find ourselves inside love, distance and heartbreak.
— Bookreporter

Impressive. . . . The pull and tug of America’s relationship with the Muslim world pulse through the 48 years spanned by this novel, from before the 1973 Arab oil embargo to post-September 11. . . . The novel’s beautiful conclusion leaves hope that families divided by culture and geography can reunite.
— New York Journal of Books

This lovely novel traces the life of a young woman caught between parents and cultures, from Saudi Arabia to America, and brings both worlds to life in all their complexities.
— Shilpi Somaya Gowda, author of The Shape of Family

Bride of the Sea is a marvel. Eman Quotah has such compassion for her characters—especially the unforgettable Hannah—while uncovering new ideas about pacing and structure. This is an intricately realized novel that honors every place it depicts.

— Rakesh Satyal, author of No One Can Pronounce My Name