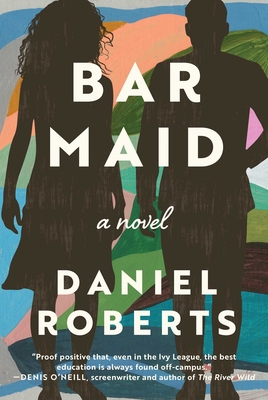 It’s September 1987. Charlie Green is an eighteen-year-old romantic and aspiring alcoholic, whose great wish is to fall in love with a light-eyed girl on his first day of college and never look back. Charlie believes in the magic of bars and girls. He believes he can use these talismans to finally feel at home, an assurance his dim and privileged childhood did not provide. At the Sansom Street Oyster House, he meets Paula Henderson, a beautiful and deceptively soulful waitress who is the most overqualified bar maid in all the city—and perhaps the most alluring.

But there are obstacles in the Philly night between Charlie and his full heart. Drunks, louts, boyfriends—heroes too. And in Paula’s eyes, Charlie becomes one. When she takes him home to New Hope, PA, to meet her very Catholic mother, the young couple must contend with the consequences of their pure love.

In this darkly comedic coming-of-age novel, Charlie Green needs to grow up fast. At stake is his soul.

Daniel Roberts is a native New Yorker who attended the University of Pennsylvania, where the seeds were planted for his debut novel, Bar Maid. Roberts is the author of the plays Haunted House, which the New York Times called  “Sparklingly original with characters that stick,” and Brando, of which Time Out New York wrote: “An impressive piece of writing, recalling Edward Albee or John Guare.” He lives in New York City with his wife and daughter.

"Daniel Roberts has created a protagonist that may well go down in literary history as a representation of the angst that accompanies coming of age."—Vincent Dublado for Readers’ Favorite

"An archly comic love story with notes of farce and fable . . . Roberts' old-school, slightly surreal humor has a dash of Barthelme or Perelman.”—Kirkus Reviews

"A deeply felt coming-of-age story in the style of Michael Chabon's Wonder Boys or even a great John Hughes movie. And like Pretty in Pink or Some Kind of Wonderful, this poignant romance is set in the cynical and selfish 1980s, throwing the genuine sweetness of the characters into high relief. Bar Maid drinks its way through the angsty end of adolescence, lighting signal fires in the darkness with laugh-out-loud moments and unabashed sincerity."—Melissa Dalley, US Review of Books

"Set in the late 1980s, Bar Maid is an unashamedly male-centered coming-of-age story that has obvious literary antecedents in The Great Gatsby and The Catcher In the Rye."—IndieReader

"If you're a fan of coming-of-age stories such as J.D. Salinger's Catcher in the Rye, you're going to love Bar Maid. Author Daniel Roberts tells a hilarious tale of a privileged young man finding himself having to grow up before his time as circumstances put him in a situation he could've never foreseen. Full of wit, charm, humor, and heart, the narrative feels like a breeze to go through. The characters are vibrant and full of life. They have layers to their personalities with complex motives and agency to their actions that make them utterly compelling to read. Bar Maid is an absolute blast from start to finish. I gobbled it up in one sitting.”—Pikasho Deka for Readers’ Favorite

“In this compelling coming-of-age story, Charlie Green has to overcome stifling privilege that threatens to stunt his capacity to feel. You may start out wanting to dislike him (too much money and booze), but you won’t be able to if you read past the first few pages. And you won’t be able to put this book down. Charlie Green is perceptive, laugh-out-loud funny, and endowed with a rare, honest tenderness. The author grants every one of his characters, great and small, their full humanity, but it’s the vivid, intelligent women who almost steal the book.Bar Maid is a vigorous assault on the current plague of cynicism, an unsentimental adventure that will surprise you and leave you feeling a little better about being human.”
—Janet Capron, author of Blue Money

"Daniel Roberts' rowdy and tender coming-of-age romp is proof positive that, even in the Ivy League, the best education is always found off-campus."—Denis O’Neill, screenwriter and author of The River Wild

"A snazzy, robust, sometimes hilarious novel about a kid 'stuck in the 80s, figuring stuff out.’”—Nick Lyons, author of Fire in the Straw