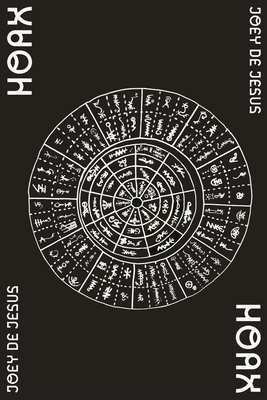 HOAX is a conceptual body of poetry, a tome of disparate but interwoven lyric fragments, sigils, concrete poems, incantations, evocations, objects. HOAX, in book form, includes NOCT: The Threshold of Madness (The Atlas Review, 2019), a poetic chronicle of identity-disrepair erased of a popular how-to guide in "black magic." The piece forms a series incantations centered on anti-queer, anti-black formulations in the source text and features vectorized sample of over two-hundred pages of encoded erasure.

HOAX / SPELLS contains a collection of prayer poems and minor evocations toward survival, including several blessings of the implements one might turn to in ritual practice as regular life and several rota-poems. VANTABLACK is a 20-page, at-times prose-blocked, meditation on lived experiences with ghostly matters, dream divination, trauma, imprisonment and the justice system.

MATERIA is a collection of ekphrastic poems based off Japanese animator and illustrator Yoshitaka Amano's Tarot Deck. Several poems have been reimagined off the page and laser-cut onto suede leather performance scrolls.

HOAX / DECK consists of a hundred and eight poems, each assigned to a star in the night sky based on cosmological arrangements approximated from several alternative mythical sources and mystical sources involving the number one hundred and eight. Each star is a face, is a sense of essence one assumes.

HOAX / MAP is a large-scale rota-poem of a hundred and eight sigil-poems arranged in alignment with the night sky. It may be used to configure the reading of HOAX / DECK and each poem in "Materia" in tandem with the positions of the celestial objects relative to how we perceive them on earth.

The HOAX box set includes a quad-fold game-board version of the HOAX / MAP, an accordion book (HOAX / SCROLL), and a deck of 108 incantatory cards, in addition to the book itself (388 pp). Inside the book, on the left-hand side of the 108 considerations, you will find the rotapoems as they appear in the deck of cards, on the right-hand side, a text-reader accessible transcription of the poem.

View and interact with a virtual exhibition of HOAX here, previously selected for the 2019-2020 BRIC ArtFP Project Room Commission, where objects from HOAX explode out into space, becoming "a living book in sections."