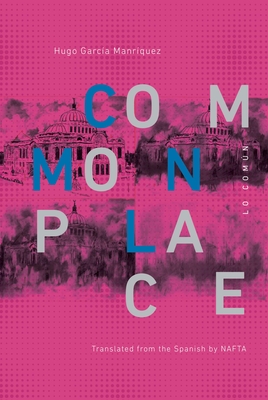 By Hugo García Manríquez, The North American Free Translation Agre (Translator)
Please email or call us for pricing on this book.

COMMONPLACE examines the layers of colonial and geopolitical violence that underlie both contemporary landscapes of Mexico City and the nation's literary institutions.

COMMONPLACE examines the layers of colonial and geopolitical violence that underlie both contemporary landscapes of Mexico City and the nation's literary institutions. Literally, the Palacio de Bellas Artes is constructed over chinampas, floating platforms used by the Mexica in agricultural cultivation. In COMMONPLACE, Garc a Manr quez delves into the mutually-constitutive relationship between national culture and the culture of nationalism, asking if other forms of poetic and artistic production are possible given the conditions of ambient violence under which that production must inevitably occur. Garc a Manr quez further links the Mexican state? and the cultural apparatus it supports? to ongoing ecological catastrophe, suggesting that more explicit forms of political force find their basis in the slower violence of environmental exploitation and the systematic erasure of indigenous knowledge across the Global South.

COMMONPLACE is a literary topos of the natural world, a compilation of the environmental crisis made with an eye so wide that it includes the Popul Vuh, the Palacio de Bellas Artes, and the budget of Sedena. This makes it a nature poem that is in no way nostalgic, a political poem that is in no way nationalist, and one of the most moving poems I've read in a long time. --Juliana Spahr

Hugo Garc a Manr quez's COMMONPLACE brims with lists? of statistics and flowers, of weapons and endangered species. Think Whitman, if Whitman were not concerned with raising up a new nation but with documenting the failure of the nation state and interrogating the role of the poem as witness. COMMONPLACE is a catalog that collapses into a poetics, as well as a catalog of collapse. In stark and brilliant verse, Garc a Manr quez reminds us that 'discussions about poetry / . . .are in the end discussions / about politics.' COMMONPLACE is a poem and a lesson, an indictment and an incitement to action --Susan Briante

These poems both catalog and interrupt contact between the military and the ecological in everyday contexts: how traces left by the glands of a white-tailed deer and petals from bright yellow creosote also touch Colts and Glocks and ion scanners. In doing so, they ask me to confront whether there remains anything private in my so-called private life. As Garc a Manr quez writes, 'When we read literature / we read the budget of the Mexican army.' And in that budget, we may spy the poetics of our own elegies. This compact, but frightening, book invites us to consider 'The collapse of abstraction / as another form of freedom.'--Divya Victor