A Sense of Brutality: Philosophy after Narco-Culture (Paperback) 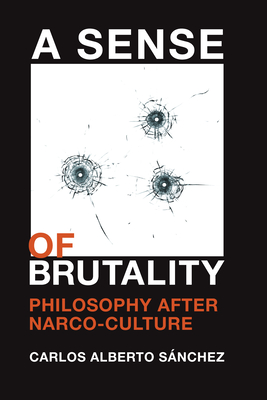 By Carlos Alberto Sánchez
Email or call for price.
Backordered

Contemporary popular culture is riddled with references to Mexican drug cartels, narcos, and drug trafficking. In the United States, documentary filmmakers, journalists, academics, and politicians have taken note of the increasing threats to our security coming from a subculture that appears to feed on murder and brutality while being fed by a romanticism about power and capital. Carlos Alberto Sánchez uses Mexican narco-culture as a point of departure for thinking about the nature and limits of violence, culture, and personhood. A Sense of Brutality argues that violent cultural modalities, of which narco-culture is but one, call into question our understanding of “violence” as a concept. The reality of narco-violence suggests that “violence” itself is insufficient to capture it, that we need to redeploy and reconceptualize “brutality” as a concept that better captures this reality. Brutality is more than violence, other to cruelty, and distinct from horror and terror—all concepts that are normally used interchangeably with brutality, but which, as the analysis suggests, ought not to be. In narco-culture, the normalization of brutality into everyday life is a condition upon which the absolute erasure or derealization of people is made possible.

Carlos Alberto Sánchez is Professor of Philosophy at San José State University. Over the years, he has written on topics in phenomenology, the philosophy of immigration, existentialism, and Mexican philosophy and culture. He is the author of a number of articles and several books, including The Suspension of Seriousness: On the Phenomenology of Jorge Portilla (SUNY 2012) and Contingency and Commitment: Mexican Existentialism and the Place of Philosophy (SUNY 2016). He is also co-editor of Mexican Philosophy in the 20th Century: Essential Readings (Oxford 2017). Born in Southern California, Dr. Sánchez spent his youth in Michoacán, Mexico before receiving his PhD from the University of New Mexico in 2006.