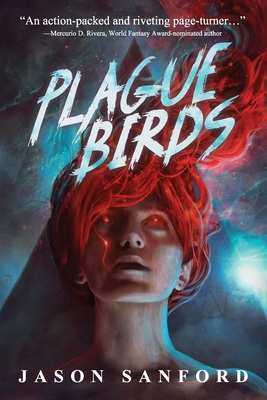 By Jason Sanford
Please email or call us for pricing on this book.

Glowing red lines split their faces. Shock-red hair and clothes warn people to flee their approach. They are plague birds, the powerful merging of humans and artificial intelligences who serve as judges and executioners after the collapse of civilization. And the plague birds' judgment is swift and deadly, as Crista discovered as a child when she watched one kill her mother.

In a world of gene-modded humans constantly watched over by benevolent AIs, everyone hates and fears the plague birds. But to save her father and home village, Crista becomes the very creature she fears the most. And her first task as a plague bird is hunting down an ancient group of murderers wielding magic-like powers.

As Crista and her AI symbiote travel farther from home than she ever imagined, they are plunged into a strange world where she judges wrongdoers, befriends other outcasts, and uncovers an extremely personal conspiracy that threatens the lives of millions.

Plague Birds is a genre-bending mix of science fiction and dark fantasy and the epic story of a young woman who becomes one of the future's most hated creatures, with a killer AI bonded to her very blood.