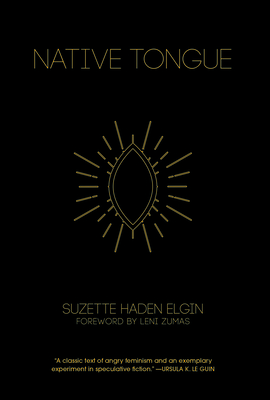 Originally published in 1984, this dystopian trilogy--a pioneering feminist experiment--is a testament to the power of language and women's collective action (Literary Hub).

In 2205, the 19th Amendment has long been repealed and women are only valued for their utility. The Earth's economy depends on an insular group of linguists who breed women to be perfect interstellar translators until they are sent to the Barren House to await death. But instead, these women are slowly creating a language of their own to make resistance possible. Ignorant to this brewing revolution, Nazareth, a brilliant linguist, and Michaela, a servant, both seek emancipation in their own ways. But their personal rebellions risk exposing the secret language, and threaten the possibility of freedom for all.

"This angry feminist text is also an exemplary experiment in speculative fiction, deftly and implacably pursuing both a scientific hypothesis and an ideological hypothesis through all their social, moral, and emotional implications." --Ursula K. Le Guin

A welcome reminder of the feminist legacies of science fiction. . . . Explores the power of speech, agency, and subversion in a work that is as gripping, troubling, and meaningful today as it has ever been. --Publishers Weekly (starred review)

Suzette Haden Elgin (born Patricia Anne Wilkins; 1936-2015) was an American science fiction author. She founded the Science Fiction Poetry Association, and was considered an important figure in the field of science fiction constructed languages. Elgin was also a linguist; she published nonfiction, of which the best-known is the Gentle Art of Verbal Self-Defense series.