A Time to Be Born (Paperback) 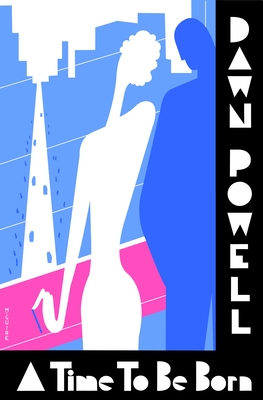 Set against an atmospheric backdrop of New York City in the months just before America’ s entry into World War II, A Time To Be Born is a scathing and hilarious study of cynical New Yorkers stalking each other for various selfish ends. At the center of the story are a wealthy, self-involved newspaper publisher and his scheming, novelist wife, Amanda Keeler. Powell always denied that Amanda Keeler was based upon the real-life Clare Boothe Luce, until years later when she discovered a memo she’d written to herself in 1939 that said, “Why not do a novel on Clare Luce?” Which prompted Powell to write in her diary “Who can I believe? Me or myself?”

When Dawn Powell died in 1965, virtually all her books were out of print. Not a single historical survey of American literature mentioned her, even in passing. And so she slept, seemingly destined to be forgotten – or, to put it more exactly, never to be remembered.

How things have changed! Numerous novels by Dawn Powell are currently available, along with her diaries and short stories. She has joined the Library of America, admitted to the illustrious company of Ralph Waldo Emerson, Henry Adams, Frederick Douglass, and Edith Wharton. She is taught in college and read with delight on vacation. For the contemporary poet and novelist Lisa Zeidner, writing inThe New York Times Book Review, Powell “is wittier than Dorothy Parker, dissects the rich better than F. Scott Fitzgerald, is more plaintive than Willa Cather in her evocation of the heartland, and has a more supple control of satirical voice than Evelyn Waugh.” For his part, Gore Vidal offered a simple reason for Powell’s sudden popularity in the early Twentieth Century: “We are catching up to her.”

Dawn Powell was born in Mt. Gilead, Ohio, on November 28, 1896, the second of three daughters. Her father was a traveling salesman, and her mother died a few days after Dawn turned seven. After enduring great cruelty at the hands of her stepmother, Dawn ran away at the age of thirteen and eventually arrived at the home of her maternal aunt, who served hot meals to travelers emerging from the train station across the street. Dawn worked her way through college and made it to New York. There she married a young advertising executive and had one child, a boy who suffered from autism, then an unknown condition.

Powell referred to herself as a “permanent visitor” in her adopted Manhattan and brought to her writing a perspective gained from her upbringing in Middle America. She knew many of the great writers of her time, and Diana Trilling famously said it was Dawn “who really says the funny things for which Dorothy Parker gets credit.” Ernest Hemingway called her his “favorite living writer.” She was one of America’ s great novelists, and yet when she died in 1965 she was buried in an unmarked grave in New York’s Potter’s Field.

"Dawn Powell's 1942 comedy of manners . . . steers us through the lives of women who come to New York from the hinterlands, for love, money, opportunity and a good time. One, Amanda Keeler Evans, a figure based on Clare Boothe Luce, is a vapid and conniving social climber who marries a newspaper baron to set her own writing career afoot. The other, Vicky Haven is a victim of Amanda’s social and romantic manipulations. Few books have so bitingly and energetically captured the hunger for status and success that animate the city and enrage so many." — The New York Times

“The Powell Effect is strikingly evident in her handling of the Clare Boothe Luce character in her roman à clef A Time to Be Born. The character is, in every conventional sense, a monster of sexual and literary deception, and a consummate liar and user, yet seen through Powell’s clarifying lens her actions become understandable — one even comes to accord her energies a respect akin to that we have for Becky Sharp. To feel, really feel, the heartbreak of an objectively contemptible character is an exquisitely mixed literary experience, and Powell was peerless in keeping her readers off stride.” —Gerry Howard in Salon