Full of Life: A Biography of John Fante (Paperback) 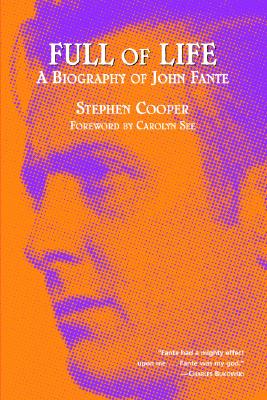 By Stephen Cooper
Please email or call us for pricing on this book.

In the definitive biography of John Fante, English and film studies professor Stephen Cooper explores the life of a man whose muse was Los Angeles. If ever a writer presented an enigma to the literary world, it was Fante--who grappled at once with brilliance and cruelty, yet presented a talent that has been equated with that of America's finest writers. From his home near L.A.'s Bunker Hill and his days filled with frustration, rage and love, Fante's life is at one with his characters' lives, but Cooper pinpoints the parallels and the divergences.

Fante had a mighty effect upon me . . . Fante was my god. --Charles Bukowski

The best literary biographies always bring you back to the work, and Stephen Cooper's Full of Life certainly does that. I read it all at once, on fire with its feeling for a man who lived as hard and full as he wrote. Cooper does justice to Fante. --Thom Jones, author of The Pugilist at Rest

Fante lived and wrote first in this beautiful, taxing, still-being-born city. What he left us is invaluable. And Stephen Cooper has respectfully magnified this legacy by giving us this truly terrific biography. --Carolyn See

Stephen Cooper received his MFA in Creative Writing from the University of California, Irvine, and his Ph.D. from the University of Southern California. Among his honors are an NEA Creative Writing Fellowship in Fiction and the Distinguished Faculty Scholarly and Creative Activities Award at California State University, Long Beach. He discovered and edited the manuscript of John Fante's last book, The Big Hunger: Stories 1932-1959, and is also a co-editor of John Fante: A Critical Gathering.