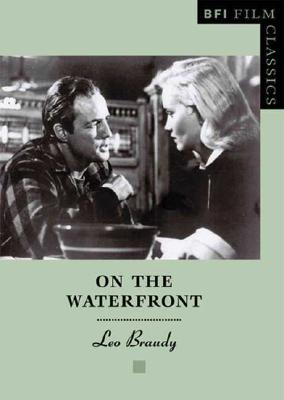 By Leo Braudy
Email or call for price.
Out of Print

I could have been a contender, I could have been somebody. So speaks the haunted former boxer Terry Malloy (Marlon Brando) to his brother Charley (Rod Steiger) in a scene from On the Waterfront (Elia Kazan, 1954) that is one of the most famous in all cinema. Set among unionised New York longshoremen, Kazan's film (from a screenplay by Budd Schulberg) recounts Terry's struggle against corruption and his ultimate, hard-won victory. The marvellous performances of Brando, Steiger and Eva Marie Saint (as well as Karl Malden and Lee J. Cobb), Boris Kaufman's photography and Leonard Bernstein's score all justify the film's fame. But On the Waterfront is also notorious, regarded by many as an attempt at justifying the decision on the part of Kazan (and Schulberg) to name names before the House UnAmerican Activities Committee. That controversial decision is still incendiary today (as was evidenced in the furore that surrounded Kazan's Academy Award for Lifetime Achievement in 1999). With Kazan's death in 2003 and Brando's in 2004, a reappraisalof On the Waterfront is timely and necessary. In this definitive study, Leo Braudy tells the complicated story of the film's production. He revisits the facts behind the controversy of Kazan's testimony but, above all, he analyses the elements which contribute to the enduring appeal of On the Waterfront: the Method-inspired acting, the music and cinematography, the use of authentic locations and its powerfully symbolic depiction of post-war American values.

Leo Braudy is University Professor and Bing Professor of English at the University of Southern California. He is the author of, among other books, From Chivalry to Terrorism: War and the Changing Nature of Masculinity (2003).