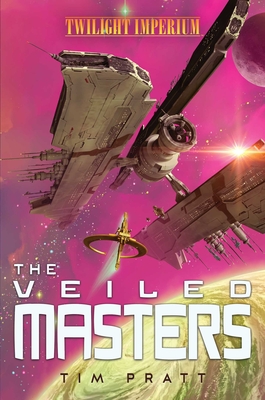 The galaxy stands on the brink of war, yet hope remains that the vast web of schemes can be exposed before it’s too late, in this astounding space opera from the acclaimed game, Twilight Imperium

The balance of power is shifting, with bold new alliances, unknown invaders, and the rumored return of the galaxy’s ancient masters. When black-ops spy Amina Azad saves a Hacan ambassador from assassination, she draws him into her investigation of a vast conspiracy: unseen forces are destabilizing the whole galaxy, at the worst possible time. Pursued by agents from dozens of other factions, they can only make progress by allying with their apparent enemies. But even they might be compromised – duped into action by a secret puppet-master. How can they trust an alliance when they can’t trust themselves?

TIM PRATT is a Hugo Award-winning SF and fantasy author, and finalist for the World Fantasy, Sturgeon, Stoker, Mythopoeic, and Nebula Awards, among others. He is the author of over twenty novels, and scores of short stories. Since 2001 he has worked for Locus, the magazine of the science fiction and fantasy field, where he currently serves as senior editor.

“Pratt’s worldbuilding fascinates, and the plot serves up action and big ideas in equally tasty helpings. This is definitely a series to watch.”

"I am sad this series is over but I am incredibly happy we got to read and experience it. I also adored the ending which does leave the door open for us to return to the worlds of Twilight Imperium in the future!"
— What You Tolkien About

"Pratt’s upbeat, energetic style skilfully avoids all the pitfalls, instead giving us intriguing, layered characters, despite the necessary scene changes; and a clear plotline that emerges from the twisty conspiring which held me from the beginning."
— Brainfluff

"it's space opera fun that's not too long and without much impact, but it's executed oh so well and is just so much fun, that well....sometimes you need that, and it's exactly what I want when I do."
— Garik16's SFF Reviews