All My Colors (Mass Market) 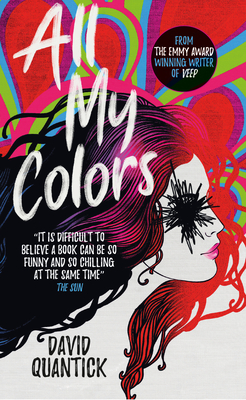 By David Quantick
$8.99
On Our Shelves Now

"David Quantick is one of the best kept secrets in the world of writing. He's smart, funny and unique. You should let yourself in on the secret." - Neil Gaiman

It is March 1979 in DeKalb Illinois. Todd Milstead is a wannabe writer, a serial adulterer, and a jerk, only tolerated by his friends because he throws the best parties with the best booze. During one particular party, Todd is showing off his perfect recall, quoting poetry and literature word for word plucked from his eidetic memory. When he begins quoting from a book no one else seems to know, a novel called All My Colors, Todd is incredulous. He can quote it from cover to cover and yet it doesn't seem to exist.

With a looming divorce and mounting financial worries, Todd finally tries to write a novel, with the vague idea of making money from his talent. The only problem is he can't write. But the book - All My Colors - is there in his head. Todd makes a decision: he will "write" this book that nobody but him can remember. After all, if nobody's heard of it, how can he get into trouble?

As the dire consequences of his actions come home to both Todd and his long-suffering friends, it becomes clear that there is a high - and painful - price to pay for his crime.

"A morality tale, a comedy, a horror story rolled into one. All My Colors has it all."
- The Sun

David Quantick is an Emmy Award-winning television writer for such shows as Avenue 5, Veep, The Thick of It and The Day Today. He is the author of All My Colors, Sparks, The Mule, and two writing manuals: How To Write Everything and How To Be A Writer.

"David Quantick is one of the best kept secrets in the world of writing.  He's smart, funny and unique. You should let yourself in on the secret." - Neil Gaiman

"wonderfully bizarre" .... "...as a twisty and fitfully funny episode of The Twilight Zone, it's a blast. A caustic, unexpected comic horror story in which the villain, as always, thinks he's the hero." - Kirkus Reviews

"All My Colors is by turns a supernatural revenge fantasy, a black comedy, and a self-abnegating parody. It is hysterical, shocking, and propulsive—leave the lights on for its end."
-Foreword Magazine

"Quantick ably sketches an unappealing but interesting protagonist swiftly out of his depth, and the slowly unfolding literary menace will appeal to fans of Jonathan Carroll's The Land of Laughs (1980) or of literary-themed horror in general."  -Booklist

"With his witty, cautionary horror story, David Quantick entertains readers from start to finish: he turns his sharp eye on the dynamics of publishing industry in a novel that explores the nature of story-telling itself. Fast-paced and easy to read, this novel is a must-read for fans of Chuck Palahniuk, Drew Magary and John Niven." - Mystery Tribune

“Quantick spins the tired trope of a book about someone writing a book into a darkly humorous story about ego and comeuppance, one that, for a moment, lets the reader believe in a just world where jerks get their due punishment” - Barnes & Noble SFF Blog

“Too many novels about fictional stories do a terrible job of convincing the reader that the subject matter is actually worthwhile: this is one of those rare books that creates a wholly convincing novel on which to hang its plot” - The Frumious Consortium