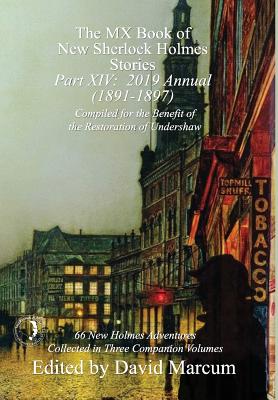 This is book number 14 in the MX Book of New Sherlock Holmes Stories series.

Part XIV: Charles Veley and Anna Elliott, Mark Sohn, David Marcum, S. Subramanian, Roger Riccard, Marcia Wilson, Tracy J. Revels, Arthur Hall, GC Rosenquist. Edwin A. Enstrom, Jayantika Ganguly, C.H. Dye, Matthew Booth, Stephen Herczeg, Geri Schear, Liz Hedgecock, Carl Heifetz, Gayle Lange Puhl, Harry DeMaio, I.A. Watson, and Thomas A. Burns, Jr. with a Poem by Jacquelynn Morris and forewords by Will Thomas, Roger Johnson, Melissa Grigsby, Steve Emecz, and David Marcum. 66 Stories New Holmes Adventures in 3 Simultaneously Published Volumes. In 1881, a weary doctor, wounded while serving in the military in Afghanistan, returned to London, only to be introduced to a most unusual young man who was already making a name for himself as the world's first consulting detective. At that time, they were just in their late twenties, unaware of their legendary futures. They would go on to become two of the most famous and recognizable figures in the world: Sherlock Holmes and Dr. John H. Watson. In 1887, Holmes and Watson's first investigation as a team, A Study in Scarlet was published. The Sign of Four followed in 1890, and then, in 1891, the world was electrified with the publication of The Adventures of Sherlock Holmes in the newly-formed Strand Magazine. And the world would never be the same. Through the rest of the Nineteenth Century, and all the way through the Twentieth as well, Holmes and Watson's fame would grow. The Twenty-first Century is no different . . . . In 2015, The MX Book of New Sherlock Holmes Stories burst upon the scene, featuring stories set within the correct time period, and written by many of today's leading Sherlockian authors from around the world. That first anthology, spread over three huge volumes, contained 63 stories and was the largest collection of its kind ever assembled in one place. Response was immediately and overwhelmingly positive, and soon there were calls for additional collections. Now, we proudly present Parts XIII, XIV, and XV, breaking the record of the first three volumes with 66 new adventures of Holmes and Watson.

Over 150 contributors (so far) to the accumulated volumes of The MX Book of New Sherlock Holmes Stories have joined together from around the world to produce over 330 new Holmes adventures, each donating their royalties to the Stepping Stones School and the continuing restoration of Undershaw, as well as to honor Sherlock Holmes, the man described by Watson as "the best and wisest . . . whom I have ever known."All royalties from this collection are being donated by the writers for the benefit of the preservation of Undershaw, one of the former homes of Sir Arthur Conan Doyle.