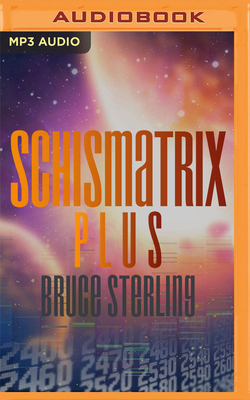 By Bruce Sterling, Pavi Proczko (Read by)
$19.99
Email or call for price

The Nebula-nominated novel of "a brave new world of nearly constant future shock"--plus all the short fiction of the Shaper/Mechanist universe (The Washington Post).

Acclaimed science fiction luminary and a godfather of the genre's remarkable offspring--cyberpunk--Bruce Sterling carries readers to a far-future universe where stunning achievements in human development have been tainted by a virulent outbreak of prejudice and hatred.

Many thousands of years in the future, the human race has split into two incompatible factions. The aristocratic Mechanists believe that humans can only achieve their greatest potential through technology and enhancing their bodies with powerful prosthetics. The rebel Shapers view these "improvements" as abominations, and their faith in genetic enhancements over mechanical ones has led to violent, even murderous, clashes between the two sects.

One man is caught in the middle. The child of Mechanists, Abelard Lindsay is a former Shaper diplomat who was betrayed and cast out of the fold. Scrupulously trained in the fine art of treachery and deceit, he travels freely between the warring camps during his never-ending exile, embracing piracy and revolution all along the way. But while saving his own skin is Lindsay's main motivation, a greater destiny awaits him, one that could offer a bold new hope for a tragically sundered humankind.

A breathtaking flight of unparalleled imagination, Bruce Sterling's Schismatrix Plus also includes every subsequent excursion into the Mechanist and Shaper universe, complementing his acclaimed novel with the complete collection of mind-boggling Schismatrix short fiction. The result is is a total immersion into the Mechanist/Shaper universe from the Hugo, Campbell, and Arthur C. Clarke Award-winning author called "a writer of excellent fineness" by Harlan Ellison and "one of the very best" by Publishers Weekly.