Biblical Eschatology: A Study on the End Times and the Exclusiveness of Israel in the Bible. (Paperback) 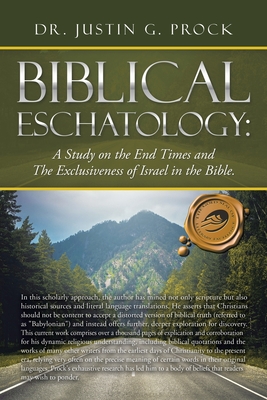 In recent history, men from a variety of backgrounds have come to the same conclusion: that the Bible is about Israel only. For example: In 1861, John Mason Neale translated an ancient twelfth century Latin hymn and its title was O Come, O Come Emmanuel. Ever since 1861, Christians have sung that hymn at Christmas time, especially at Advent. Do you know what the words really mean that you are singing? In 1878, Edward Hine wrote an article titled, Seven-Eighths of the Bible Misunderstood, wherein he explains that seven-eighths of the Bible is about national salvation, i.e. the national salvation of True Israel; whereas, only one-eighth of the Bible is about personal salvation. Did you know that? In the 1960's, Pastor Sheldon Emry wrote an article title, An Open Letter to Any Minister Who Teaches the Jews Are Israel, wherein he is of the opinion that the Israel that exists today since 1948 is not the True Israel of the Bible. In 1998, Arnold E. Kennedy wrote a book titled, The Exclusiveness of Israel, wherein he legally proves using the King James Version of the Bible that the Bible in general is only about True Israel. So, here we are in the Twenty-First Century, and the Gospel that is preached today is totally convoluted from that which was preached in the First Century A.D. by Yahshuah and His disciples, i.e. the Gospel of the Kingdom. So, where did the so-called churches and pastors go wrong? By the way, is there really a hierarchy in the Bible? In order to find out what the truth really is, we have to look at the original languages in which the Bible was written and then translated. For example, the Old Testament was written in Hebrew and Aramaic, then translated into Greek. The New Testament was written in Hebrew and Greek. Both Testaments were put together and translated into Latin, then German, and finally into English, from which the entire world received their own translation of the Bible. So, what was the original meaning of the words used in the original languages, i.e. the etymology of the words. Once that is determined, then we can go onto the next phase and discuss types in the Bible. From there, what is the Law of First Mention? How should Bible prophecy be Interpreted? Who are the keys to Bible prophecy? Where are we in the Bible prophecy timeline? During these discussions, we will find out who Yahweh chose of all the families of the earth to make His own. The churches teach universalism. The question then becomes, Who was Yahweh's Law given to? What are the Laws of Yahweh? And then the even bigger question becomes, Who was Yahshuah sent to? All of these questions and more will be answered as you read this book...

Dr. Justin G. Prock has spent 20 years in management in the retail, legal, and restaurant fields in the United States, and has spent over 10 years as a professor in South Korea. Dr. Prock is currently teaching at Pyeongtaek University in Pyeongtaek, South, where he teaches English and English and Culture, which includes Bible Prophecy, Current Events, Economics, History, and Political Science. Dr. Prock holds a Bachelor's in History from Tennessee Technological University, a Master's in Biblical Studies, a Master's of Divinity, and a Doctorate in Biblical Studies and Eschatology from Louisiana Baptist University, a Certificate in Kingdom Studies from The National Bible College in Durham, England, as well as a Certificate in Christian Education from The American Institute of Theology. Dr. Prock is currently working on another Certificate from The Bible Mastery Boot Camp. Dr. Prock has published a book based upon his previous research, Why Did Yahweh and His Son, Yahshuah, Say What They Said? A Who's Who That May Change The Way We Think About Eschatology. Dr. Prock is currently in the process of being ordained. Dr. Prock grew up in the Episcopal Church; however, due to the beliefs of that denomination, Dr. Prock's family left the church and spent several years "church hopping." However, YAHWEH GOD got a hold of Dr. Prock, and brought him to You Turn For Christ, a ministry of Calvary Chapel in 2003 where he started his Biblical education and has been a student of the Bible ever since!