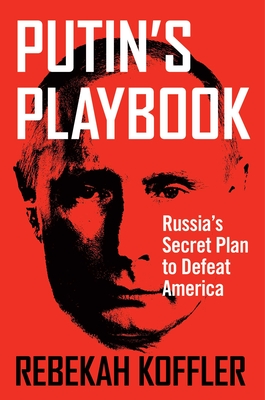 Putin’s Playbook is urgently essential reading. A former U.S. intelligence specialist who was born and raised in the Soviet Union explains what Vladimir Putin wants and how he plans to get it. Russia’s ruler is following a carefully devised plan to defeat the United States.

Rebekah Koffler came to America as a young woman. After 9/11, she joined the Defense Intelligence Agency, devoting her career to protecting her new country. Now she reveals in chilling detail Putin’s long-range plan—his “playbook”—to weaken and subdue the United States, preparing for the war that he believes is inevitable.

With the insight of a native, Koffler explains how Russians, formed by centuries of war-torn history, understand the world and their national destiny. The collapse of the Soviet empire, which Putin experienced as a vulnerable KGB agent in East Germany, was a catastrophic humiliation. Seeing himself as the modern “Czar Vladimir” of a unique Slavic nation at war with the West, he is determined to restore Russia to its place as a great power.

Koffler’s analysis is enriched by her deeply personal account of her life in the Soviet Union. Devoted to her adopted homeland but concerned about the complacency of her fellow citizens, she appreciates American freedoms as only a survivor of totalitarianism can. An opportunity to view ourselves and the world through the eyes of our adversary, Putin’s Playbook is a rare and compelling testimony that we ignore at our peril.

REBEKAH KOFFLER is a Russian-born U.S. intelligence expert who served as a Russian Doctrine & Strategy specialist in the Defense Intelligence Agency. Working with the DIA and the CIA's National Clandestine Service, she has led "red" teams during war-games and advised senior Pentagon officials. She has delivered classified briefings to top U.S. military commanders, NATO ministers, the directors of the CIA and DIA, the White House National Security Council, and senior congressional staff. In her post-public service career, Rebekah is a writer and national security commentator whose work has been published on the Fox News website, the Wall Street Journal, Newsweek, The Hill, the New York Post, Real Clear Politics, Real Clear Defense, the Daily Caller, and the Washington Times. She has appeared on Fox News, Fox Business, Fox Nation, and the Sean Hannity nationally syndicated radio show.

Born and raised in the Soviet Union, Rebekah came to America as a young woman. After 9/11, she joined the Defense Intelligence Agency, devoting her career to protecting her new country. Now she reveals in chilling detail Putin’s long-range plan— his “playbook”—to weaken and subdue the United States, preparing for the war that he believes is inevitable.

“Putin’s Playbook—a hard-hitting, very frank inspection of the man and his Russia. Rebekah Koffler brings insight that only a Russian-born analyst could. A page-turner dripping with facts and conclusions that gives us clarity few have attained; a must-read for those who want to understand [Russia and President Putin]….” —GENERAL PHIL BREEDLOVE, USAF (Ret.), seventeenth Supreme Allied Commander Europe

“Putin’s Playbook is an intriguing and informative read for those interested in peeking into the Kremlin’s motivations and wartime strategies. Koffler deliberately warns not to underestimate Russians’ deep-rooted anger over our nation’s moral assertiveness and how Putin’s animosity can escalate into war. A frightening, eye-opening prediction for U.S.-Russian relations, Putin’s Playbook will make readers see the urgency of developing a counterstrategy to the brilliance of Putin’s playbook.” —NEWT GINGRICH, former Speaker of the House of Representatives

“When the Soviet Union suddenly ceased to exist in 1991, a mortal threat to America appeared to disappear. What didn’t disappear was the ‘counterintelligence state’ that the Bolsheviks created in 1917. In the face of a feckless thirty-year American post-Soviet policy, the hard men of the KGB, successors to the totalitarian secret police, simply expropriated the wealth and remaining power of Russia. Predictably, Putin’s Russia created an American enemy where there was none. With a clear head and the sharp eye of a senior intelligence analyst, Rebekah Koffler details the ominous threat we now face.” —KENNETH deGRAFFENREID, former senior director of intelligence programs, President Reagan’s National Security Council