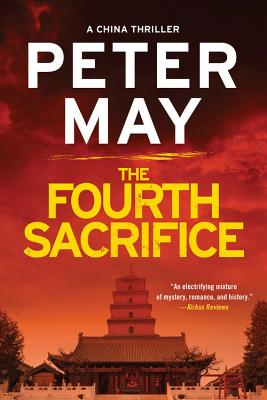 By Peter May
Email or call for price
Out of Print

This is book number 2 in the The China Thrillers series.

"AN ELECTRIFYING MIXTURE OF MYSTERY, ROMANCE, AND HISTORY." --Kirkus Reviews
"MAY'S WELL-PLOTTED FOLLOW UP... AMPLIFIES HIS VIVID PICTURE OF A CHAOTIC, VITAL MODERN-DAY CHINA" --Publishers Weekly
Li Yan and Margaret Campbell are reluctantly reunited, this time to track down a killer reenacting a series of gruesome rituals.
The Chinese police have once more been forced to enlist the services of American forensic pathologist Margaret Campbell, this time to investigate a series of four horrific ritual executions in Beijing.

Detective Li Yan is determined to discover just how one of the victims in particular, an American diplomat, became caught up in the slaying. And he is arguably even more determined to have nothing to do with Campbell, whom he finds simultaneously too foreign and too . . . familiar.

The personal polarity that once attracted Yan and Campbell again strengthens their professional partnership. Yet the closer they draw to the truth, the greater the danger posed by a killer prepared to do anything to conceal it.

Peter May was born and raised in Scotland. He was an award-winning journalist at the age of twenty-one and a published novelist at twenty-six. When his first book was adapted as a major drama series for the BCC, he quit journalism and during the high-octane fifteen years that followed, became one of Scotland's most successful television dramatists. He created three prime-time drama series, presided over two of the highest-rated serials in his homeland as script editor and producer, and worked on more than 1,000 episodes of ratings-topping drama before deciding to leave television to return to his first love, writing novels.

He has won several literature awards in France, received the USA's Barry Award for The Blackhouse, the first in his internationally bestselling Lewis Trilogy; and in 2014 was awarded the ITV Specsavers Crime Thriller Book Club Best Read of the Year award for Entry Island. Peter now lives in South-West France with his wife, writer Janice Hally.

Longlisted for the CWA Dagger in the Library Award, 2018
Praise for Peter May:

"He is a terrific writer doing something different."—Mark Billingham

"From the first page I knew I was in safe hands. I knew I could trust this writer."—Sophie Hannah

"Peter May is a writer I'd follow to the ends of the earth."—Marilyn Stasio, The New York Times

"May exposes Beijing's dirty charm in a country grappling with modernity. The fast-paced second half is strongest, but the love-hate tension of the romance captivates throughout."
—Entertainment Weekly


"An electrifying mixture of mystery, romance, and history."
—Kirkus Reviews


"May's well-plotted follow-up . . . amplifies his vivid picture of a chaotic, vital modern-day China . . . [He] evokes the intense attraction between Li and Margaret against a fascinating backdrop of the cultural divide between China and America."
—Publishers Weekly


"While the mystery is grisly and intriguing, it's the relationship between the two leads that elevates the book above many others in the genre . . . The author could have gone for the slick, familiar, fish-out-of-water story, but by choosing a subtler approach, he rewards us with a far deeper, far more satisfying story."
—Booklist

"Pulse-pounding prose . . . A masterwork of sheer momentum."
—The Herald


"Exotic and fascinating."
—Scotland on Sunday


"Both romance and thriller . . . his jealousy and her acid tongue make for entertaining reading. China and the city of Beijing are depicted extremely well and the horrors and tragic legacy of the Cultural Revolution are made poignantly clear."
—Manchester Evening News