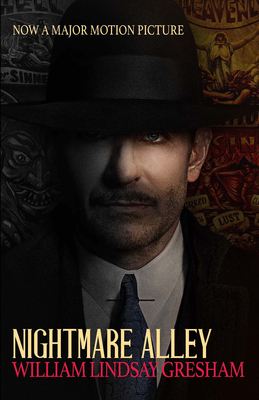 “Carny Stan Carlisle turns himself into a spiritualist/con-man and slowly builds his 'act' for the biggest take of his life, and then sees it all fall hideously apart. The aptly drawn sketches of lowlifes, losers, geeks, and limelight seekers are masterful. I'm so glad to see this classic noir thriller from 1946 be reissued in the great New York Review of Books Classics series.”
— Carl, Boswell Book Company, Milwaukee, WI

Nominated for 4 Oscars, including Best Picture

Nightmare Alley begins with an extraordinary description of a carnival-show geek—alcoholic and abject and the object of the voyeuristic crowd’s gleeful disgust and derision—going about his work at a county fair. Young Stan Carlisle is working as a carny, and he wonders how a man could fall so low. There’s no way in hell, he vows, that anything like that will ever happen to him.

And since Stan is clever and ambitious and not without a useful streak of ruthlessness, soon enough he’s going places. Onstage he plays the mentalist with a cute assistant (before long his harried wife), then he graduates to full-blown spiritualist, catering to the needs of the rich and gullible in their well-upholstered homes. It looks like the world is Stan’s for the taking. At least for now.

William Lindsay Gresham (1909–1962) was a novelist and nonfiction writer. Gresham’s was a tortured mind and a tormented life, and he sought to banish his demons through a maze of dead-end ways, from Marxism to psychoanalysis to Christianity to Alcoholics Anonymous to Rinzai Zen Buddhism. From these demons came his novel Nightmare Alley (1946), one of the underground classics of American literature. He wrote one more novel, Limbo Tower (1949), which went largely unnoticed. Three nonfiction books followed: Monster Midway (1953), Houdini (1959), and The Book of Strength (1961). Nightmare Alley brought Gresham fame and fortune, but he lost it all. The second of his three wives, the poet Joy Davidman, left him in 1953 for the British author C. S. Lewis. He killed himself in New York City on September 14, 1962.

Nick Tosches (1949–2019) was an acclaimed author of fiction, poetry, and nonfiction. Among his books are the biographies Hellfire: The Jerry Lee Lewis Story and Dino: Living High in the Dirty Business of Dreams; the novels In the Hand of Dante and Under Tiberius; and the poetry collection Chaldea and I Dig Girls. He died in New York City in 2019.

“While I've known for a long time that Nightmare Alley was an established classic of noir fiction, I was utterly unprepared for its raw, Dostoevskian power....it's more than just a steamy noir classic. As a portrait of the human condition, Nightmare Alley is a creepy, all-too-harrowing masterpiece.” —Michael Dirda, The Washington Post

"The ‘nightmare’ of the title rings true, for this delirious and unstoppable novel . . . inverts the American dream. The plot turns the Horatio Alger myth on its head and the psychology leans on Freud, but the torment, the pervading sense that the human creature lives in a trap he or she is doomed never to escape, comes from the heart and mind of the author. Never was noir more autobiographical than here. . . . Nightmare Alley remains a masterpiece, not only due to its driving narrative power, but because it’s underpinned by the premise that the human animal is alone, helpless in the face of destiny, stumbling in the dark, down the nightmare alley toward the inevitable wall of death at the end. Yet we can’t stop ourselves hoping, and fearing, that there might be something beyond that wall. The message of this disquieting book couldn’t be more human, yet that message is metaphysical rather than moral." —Los Angeles Times

“Mr. Gresham yanked the reviewer into the midst of his macabre and compelling novel, and kept him a breathless captive until the tour was over. It's a truly rewarding whirl through his nightmare alley. . . . All of it adds up to Grade-A guignol with a touch of black magic about it. . . . If you enjoy hundred-proof evil—and a cogent analysis of same with your nightcap—then, in the words of the Ten-in-One barker, hurry, hurry, hurry!” —James MacBride, The New York Times

"[Gresham's] legacy was a brilliant and horrific book—read it and you'll never refer to someone as a geek again." —The Times (London)

“While Gresham is usually described as a ‘popular novelist,’ the epithet fails to capture his contemporary notoriety. Gresham wrote the 1946 best-seller Nightmare Alley (dedicated to Davidman), a grotesque noir classic about the carnival demimonde, later made into an arresting film with Tyrone Power and Joan Blondell. One reviewer described the book as a ‘tough, relentless, colorful novel that exposes the private world of the freaks in order to comment on a sick, degrading society.’” —San Francisco Chronicle

“Gresham . . . has something of Nelson Algren's mordant power in picturing denizens of the lower depths . . . his is a promising contender for heavyweight honors in the rough, tough and morbid division.” —Jack Conroy, The Chicago Defender

“Nightmare Alley is a portrait of greed seen through the rise and fall of a carny con man.” —Publishers Weekly

"Written in 1946 and just reissued, Nightmare Alley was adapted into one of the most scabrous films of the 1940s. It's a grifter story, a carny story, whose main character is Stan Carlisle, a handsome con artist/fake mind reader who slowly works his way down the food chain until there's nothing left for him except the job of circus geek. It's a novel in which no ray of light ever penetrates. The novel is a fascinating curio of undoubtedly justified self-loathing—Gresham's second wife, the poet Joy Davidman, left him for C. S. Lewis. Gresham committed suicide in 1962. The new edition has a preface by Nick Tosches, who is working on a biography of Gresham. Certainly one of the most valuable reissues of the year." —The Palm Beach Post

"For contemporary audiences who have never strolled through sawdust and tinsel, the carnival chapters of Nightmare Alley offer an unnerving slice of seedy Americana." —The Baltimore Sun

“Certainly one of the most valuable reissues of the year.” —Canada.com

“For fans of vaudeville and magic, the book is a treasure trove of trade secrets.” —Walter Kirn, The New York Times

“William Lindsay Gresham was obsessed by the darker side of circuses and carnivals. His knowledge was profound, his sensitivity to the vice and viciousness lying just underneath the tinseled, gaudy, surface, remarkable.” —John Howard Reid, Hollywood Gold