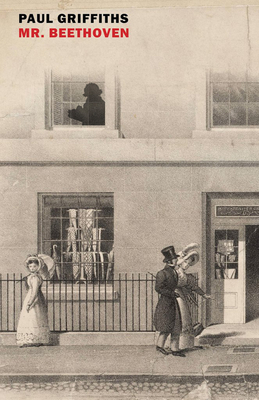 Shortlisted for the 2020 Goldsmiths Prize

Based on the German composer's own correspondence, this inventive, counterfactual work of historical fiction imagines Beethoven traveling to America to write an oratorio based on the Book of Job.

It is a matter of historical record that in 1823 the Handel and Haydn Society of Boston (active to this day) sought to commission Beethoven to write an oratorio. The premise of Paul Griffiths’s ingenious novel is that Beethoven accepted the commission and traveled to the United States to oversee its first performance.

Griffiths grants the composer a few extra years of life and, starting with his voyage across the Atlantic and entry into Boston Harbor, chronicles his adventures and misadventures in a new world in which, great man though he is, he finds himself a new man.

Relying entirely on historically attested possibilities to develop the plot, Griffiths shows Beethoven learning a form of sign language, struggling to rein in the uncertain inspiration of Reverend Ballou (his designated librettist), and finding a kindred spirit in the widowed Mrs. Hill, all the while keeping his hosts guessing as to whether he will come through with his promised composition. (And just what, the reader also wonders, will this new piece by Beethoven turn out to be?)

The book that emerges is an improvisation, as virtuosic as it is delicate, on a historical theme.

Paul Griffiths is a Welsh novelist, librettist, and music critic. Admired especially for his writings on classical music, he has worked as a critic for major publications such as The Times (London), The New York Times, and The New Yorker. His first novel, Myself and Marco Polo, was published in the UK in 1989 and won the 1990 Commonwealth Writers’ Prize. He has published two other novels, The Lay of Sir Tristram and let me tell you, and a collection of short stories, The Tilted Cup, along with books of music history and criticism and several librettos. He lives in the village of Manorbier, Wales.

“Paul Griffiths’s Mr. Beethoven is a novel about interpretation: about how a writer might go about interpreting the life of one of the most well-known—and well-chronicled—composers who ever lived, but also about the role interpretation plays in creativity of all kinds. It is also, like much of Griffiths’s work, a riddling, playful, and often very funny investigation of literary form.” —Jon Day, Music and Literature

“What would Beethoven have done with another seven years of life, and where, in the 1830s, might he have gone? The answer, in this audacious but exacting extension of the composer’s late period, is America, where an oratorio, Job, is completed (and performed) in Boston. Suffering and revelation are the subject-matter, but in Paul Griffiths’ hands, the Biblical sorrow undergoes a lasting modulation into a new key of delight in friendship, communication, and creativity.” —Will Eaves

“A formidable display of fantasy scholarship.” —Fiona Maddocks, The Guardian

“A masterly and witty historical fantasy . . . [that] feels authentic. . . Griffiths incorporates music criticism, send-ups of convoluted 19th-century prose, excerpts from letters, and even auction-catalog descriptions of correspondence and autographs. This wild quilt of styles brings a very human giant of the Classical and Romantic periods vividly to life.” —Publishers Weekly, starred review

“[A] novel of great wit and empathy, one that provides a deep insight into the composition of both classical music and historical literature through playful, inventive prose...By combining deep scholarship with a broad-minded, philosophical viewpoint, Griffiths has written a thought-provoking novel about possibility that pushes us to think hard about what we know and how we know it. He invites readers to join him in confronting the challenges of reimagining the past, and the spirit of spontaneity he offers is irresistible.” —Michael Patrick Brady, Boston Globe