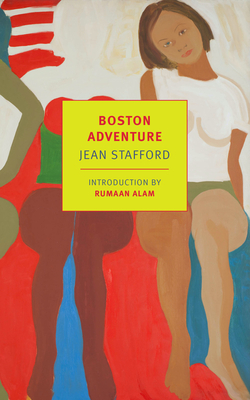 A provocative story of class struggle, privilege, and poverty that put American author Jean Stafford on the map.

Growing up in a fishing village north of Boston between the wars, Sonie, the child of immigrants, is so poor that she must “sleep on a pallet made of old coats and comforters.” She can only dream of the feather beds and perfumed soap to be found in the great city across the bay. In the summers, while helping her mother clean rooms in a shoreside hotel, she keeps company with the austere and fascinating Miss Pride. Years pass, and Sonie—now the caretaker of her fragile mother—receives an invitation from Miss Pride to move to Beacon Hill and be her personal secretary. Salvation, she thinks, is at hand. In Boston, Sonie does come to know a new and broader world, one in which she mingles with both blue bloods and louche European refugees, and yet her troubles, she discovers, are hardly over.

Boston Adventure was published when Jean Stafford was twenty-nine, and it was an immediate best seller. Combining Dickensian color and Proustian insight in its depiction of an isolated but determined young woman, it looks forward to Stafford’s celebrated novel The Mountain Lion as well as to the short stories for which she would be awarded a Pulitzer Prize in 1970.

Jean Stafford (1915–1979) was a novelist and short-story writer. She published the novels Boston Adventure, The Mountain Lion, and The Catherine Wheel; more than forty short stories; and A Mother in History, a journalistic portrait of Marguerite Oswald, the mother of Lee Harvey Oswald. Her Collected Stories won the Pulitzer Prize for Fiction in 1970.

Rumaan Alam is the author of the novels Rich and Pretty, That Kind of Mother, and Leave the World Behind. His writing has appeared in The New York Times, The New Republic, The New York Review of Books, Bookforum, and elsewhere.

“Forty years after [Stafford’s] death, her sentences still gleam like knives. . . . In Stafford, there is the kingdom of childhood in all its taboos—its furtiveness and griminess. . . . Here is the fury of children. . . . Here is the full range of their dark knowledge.” —Parul Seghal, The New York Times

“Stafford is not interested in flattering our sensibilities. . . . She has a remarkable ability to balance lacerating irony with a very plangent pathos.” —Garth Greenwell

“Boston Adventure stands as a textbook example of formal dexterity and invention. . . . Sentence for sentence, Boston Adventure is as beautifully composed as any American novel I have ever read.” —Scott Bradfield, Los Angeles Times