Subjugate or Exterminate!: A Memoir of Russia's Wars in Chechnya (Paperback) 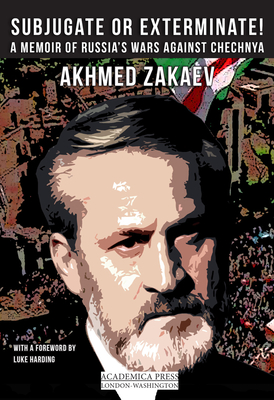 By Akmed Zakaev
Please email or call us for pricing on this book.

Foreword by Luke Harding Subjugate or Exterminate is an authoritative first-hand account of the Russo-Chechen conflict by a Chechen leader who played a central role in all the main events. Akhmed Zakaev rose rapidly from an actor of Shakespearean roles to Commander of the Western Group for the Defense of Ichkeria, and later served as Deputy Prime Minister of Chechnya and, in exile, as Prime Minister of the Chechen Republic of Ichkeria (ChRI). It describes how the Kremlin set about discrediting and destroying a democratic government by interacting with criminal gangs and fomenting Islamist forces to split the Chechen independence movement in a perverse reversal of the "War on Terror." Akhmed Zakaev's memoir begins with a historical survey of the fraught relations between the Chechens and the Russian Empire and Soviet Union, up to the collapse of the USSR. The advent of Gorbachev's Perestroika raised hopes that independence might enable Chechnya to end centuries of oppression and exploitation. Russia's first war against Chechnya (1994-1996), initially conceived by the military as a way of disguising the large-scale theft and embezzlement of funds from illegal sales of Soviet armaments during the withdrawal from East Germany, ended in humiliating defeat for Russia. Thereafter, Russia set about subverting the democratically elected government of the Chechen Republic of Ichkeria by instigating the gruesome murder of Western humanitarian aid workers and business partners, and by financing criminal gangs and anti-democratic Islamist groups that the ChRI police were unable to subdue. Interference by nationals of countries in the Middle East caused further disruption. In August 1999, Russia launched a brutal second war in Chechnya, on grounds widely believed to be fabricated and characterized by widespread war crimes. The West did not intervene. This is an eyewitness account of the dangers faced by the Chechen leaders as they tried to resist and negotiate with a treacherous opponent. It ends in the year 2000, with Vladimir Putin's election as Russia's president.