2028: Only a few seconds before midnight on the Armageddon Clock..... (Paperback) 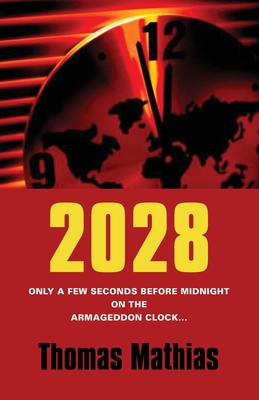 By Thomas Mathias
Email or call for price

Looking ahead to the year 2028, the view of world conditions is quite troublesome and provides nightmares for the re-election of the U.S. President, and that's before he learns of a world changing catastrophe, possibly a planet extinction event.

There are two really bad guys involved in a plot to diminish the dominant powers on Earth, on a worse case scenario, total nuclear annihilation. One is a Mid Eastern terrorist and the other, a Russian Mafia arms dealer. The only obstacle to their plan rests with an ex-convict with the incredible gift of psychokinesis, obtained and developed with the concerted efforts of two world renown scientists. Through drug enhancements and various laser procedures the scientists were able to trump the idea of fantasy with the reality of mind over matter, which will undoubtedly shake the skepticism of the reader.

It is well understood that through the decades and centuries of intellectual advancements, we've only learned to utilize approximately ten percent of our brain's potential. Who can question the possibilities when we discover how to harness fifty, sixty, and seventy percent of our potential.

This book could easily change your way of thinking on several issues.