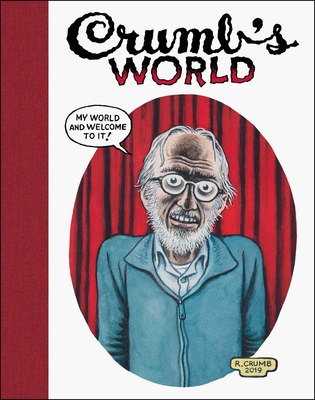 R. Crumb’s obsessions—from sex to the Bible, music, politics, and the vicissitudes and obscenities of daily life—are chronicled in this comprehensive book of work by the illustrious American comic artist.

Instrumental in the formation of the underground comics scene in San Francisco during the 1960s and 1970s, Crumb has ruptured and expanded the boundaries of the graphic arts, redefining comics and cartoons as countercultural art forms. Presenting a slice of Crumb’s unique universe, this book features a wide array of printed matter culled from the artist’s five-decade career—tear sheets of drawings and comics taken directly from the publications where the works first appeared, comic book covers, broadsides from the 1960s and 1970s, and tabloids from Haight-Ashbury, Oakland, the Lower East Side, and other counterculture enclaves, as well as exhibition ephemera. Complementing this volume are historical works from the eighteenth and nineteenth centuries that have inspired Crumb and pages from his rarely seen sketchbooks from the 1970s and 1980s that reveal his exemplary skill as a draftsman.

Documenting the critically acclaimed exhibition Drawing for Print: Mind Fucks, Kultur Klashes, Pulp Fiction & Pulp Fact by the Illustrious R. Crumb at David Zwirner, New York, in 2019, curated by Robert Storr, this publication offers an opportunity to immerse oneself in Crumb’s singular mind. In the accompanying text, Storr explores the challenging nature of some of Crumb’s work and the importance of artists who take on the status quo.

For over five decades, R. Crumb (b. 1943) has used the popular medium of the comic book to address the absurdity of social conventions, political disillusionment, irony, racial and gender stereotypes, sexual fantasies, and fetishes. Inspired by Thomas Nast, Honoré Daumier, T.S. Sullivant, and James Gillray, amongst others, his drawings offer a satirical critique of modern consumer culture, and often seem to possess an outsider’s perspective—a self-conscious stance that Crumb frequently relates to his personal life.

Robert Storr is an American artist, critic, and educator who was a curator, and then senior curator, of The Museum of Modern Art’s Department of Painting and Sculpture from 1990 to 2002 and from 2005 to 2007. He served as the first American-born director of the Venice Biennale. From 2002 to 2006, he was the Rosalie Solow Professor of Modern Art at the Institute of Fine Arts, New York University, and then dean of the Yale School of Art from 2006 to 2016, where he remains as a professor of painting and printmaking. The exhibition he organized at David Zwirner in 2013 to celebrate the centenary of Ad Reinhardt was voted “Best Show in a Commercial Space in New York” by the US Art Critics Association.

“Whatever one thinks of his subject matter, it’s difficult to deny R. Crumb’s prodigiousness with the pencil.”
— Paris Review

“The color scheme of the R. Crumb exhibition that Robert Storr curated for David Zwirner deserves an award.”
— Jackson Arn

“The cartoons of Robert Crumb, aka R. Crumb, have ignored the lines between comics and fine art, so-called good taste and bad, and countless other binaries.”
— Annie Armstrong