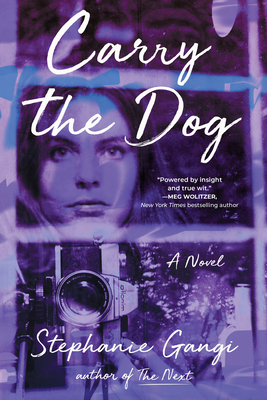 Bea Seger has spent a lifetime running from her childhood. The daughter of a famous photographer, she and her brothers were the subjects of an explosive series of images in the 1960s known as the Marx Nudes. Disturbing and provocative, the photographs shadowed the family long past the public outcry and media attention. Now, decades later, both the Museum of Modern Art and Hollywood have come calling, eager to cash in on Bea’s mother’s notoriety. Twice divorced from but still entangled with aging rock star Gary Going, Bea lives in Manhattan with her borrowed dog, Dory, and sort-of sister, Echo. After years of avoiding her past, Bea must make a choice: let the world in—and be compensated for the trauma of her childhood—or leave it all locked away in a storage unit forever.

Carry the Dog sweeps readers into Bea’s world as the little girl in the photographs and the woman in the mirror meet at the blurry intersection of memory and truth, vulnerability and resilience.

Stephanie Gangi is a poet, essayist, and novelist. Her award-winning poem, “Four,” was published in the Hippocratic Prize Anthology. Her acclaimed debut novel, The Next, was a finalist in the Writers@Work Annual Writing Competition. Her essays have been published in Literary Hub, Catapult, The Woolfer, Bust, TueNight, and NextTribe. Gangi wrote the first draft of Carry the Dog at the Leopardi Writing Conference in Recanati, Italy, after winning the Jeannine Cooney Scholarship for Excellence in Fiction. She lives in New York City.

“A witty, startlingly astute dispatch from the societal graveyard of middle-aged women.”
—People

“I can’t remember the last time I was as completely bewitched by a fictional character as I was by Bea Seger in Stephanie Gangi’s Carry The Dog. What a treat to view life through the eyes of this funny, smart, gutsy woman, who has suffered its outrageous slings and arrows, and just keeps coming back for more.”
—Richard Russo, author of Empire Falls and Chances Are . . .

“Stephanie Gangi’s Carry the Dog is powered by insight and true wit as it explores families and their aftershocks, as well as art, regret, and the state of being an older, desiring female in a world that too often looks away. I enjoyed it immensely.”
—Meg Wolitzer, New York Times bestselling author of The Female Persuasion

“Carry the Dog is a fantastic novel about art, fame, aging and the unfathomable mystery of family. Stephanie Gangi writes with a rare mix of grace and urgency.”
—Jess Walter, author of Beautiful Ruins and The Cold Millions

"There was something so authentic about this novel, and the awkward, earnest grace of the bright light at its center, Bea. It's a book about resilience, and the imperative of defining yourself to yourself, and a riveting reminder that nothing in this life is ever too late. I loved it."
—Mary Beth Keane, New York Times bestselling author of Ask Again, Yes

“Carry the Dog . . . takes up critiques of visual culture within a very personal context: a novel about aging and coming to terms with childhood trauma. By placing these conundrums inside the body of a 60-year-old woman experiencing a long-delayed coming of age, she speaks to the many women...who are going through this transition. It’s a deeply ironic moment . . . to perceive themselves, finally, as themselves, even as they are becoming invisible to the world that has fetishized them . . . When such a change is touched on in books or film, too often it’s a source of tragedy, even madness. Gangi, in refreshing contrast, argues that invisibility is freeing.”
—Los Angeles Times

"Prickly but vulnerable, Bea is an irresistible character, and Gangi’s novel is less a chronicle of growing up in the shadow of an artist parent as it is a late-in-life coming-of-age story. Fans of Gail Honeyman's Eleanor Oliphant Is Completely Fine (2017) will find as much to love in this novel as those of Myla Goldberg’s Feast Your Eyes (2019) and Dawnie Walton’s The Final Revival of Opal Nev (2021)."
—Booklist, starred review

“Magnificent . . . A dark, utterly convincing exploration of family trauma and individual survival . . . It’s easy to forget that Carry the Dog is fiction; it feels deeply real, like a true memoir from a slightly alternate world just beyond our reach.”
—New York Journal of Books

“With rambunctious and moving Carry the Dog, Stephanie Gangi shows us how uncovering the truth to our past can push us to live better lives in the present . . . She narrates all this with a light tone that is often humorous and, frankly, very entertaining; her characters are ruthless and utterly relatable every step of the way . . . Bea deals with the aging process with wit, intelligence, humor, and a feistiness that never grows old.”
—The Brooklyn Rail

“A keenly observed and devastating novel. Though Bea’s is a voice that, at times, made me laugh with recognition, her story is so dark and compelling that I woke before dawn to finish reading.”
—Polly Samson, author of A Theater for Dreamers

“A fun and touching novel . . . A story about change and what it looks like to embrace or reject its attendant discomforts.”
—Chicago Review of Books

“Funny and humane . . . Gangi’s heroine, Bea Seger, is warm and complex, engaging and brave and messed up, but the book is deceptively likable; it also takes on big subjects: aging and sexuality, agency and consent, and who gets to say what, exactly, gets to happen in the name of art.”
—Bloom

“[Bea is] one of my favorite protagonists of the year, an indefatigable older woman facing crises with great doses of wit, determination, and vulnerability.”
—Largehearted Boy

“Memorable . . . Most endearing is the character of Bea, who deals with the physical, psychological, economic, and romantic challenges of aging with humor and attitude.”
—Publishers Weekly

“Heartbreaking and gripping . . . brings a great amount of insight into the life of a child brought up as a muse to her mother’s art.”
—Campus Circle(Best Books of 2021)