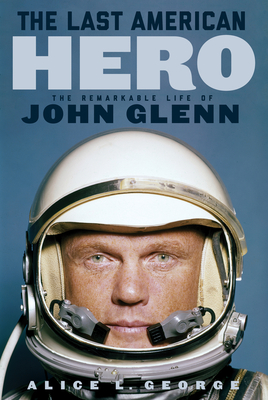 By Alice L. George
Please email or call us for pricing on this book.

On February 20, 1962, John Glenn became a national star. That morning at Cape Canaveral, the small-town boy from Ohio took his place atop a
rocket and soared into space.

He became celebrated in all corners of the world as not just the first American to orbit the Earth, but as the first space traveler to take the human race with him. Refusing to let that dramatic day define his life, he went on to become a four-term US senator—and returned to space at the age of seventy-seven. The Last American Hero is a stunning examination of the layers that formed the man: a hero of the Cold War, a two-time astronaut, a veteran senator, a devoted husband and father, and much more. At a time when an increasingly cynical world needs heroes, John Glenn’s aura burns brightly in American memory.

Alice L. George is a historian and served as a senior editor at the Charlotte (NC) News, the Lexington (KY) Herald-Leader, the Detroit Free Press, and the Philadelphia Daily News. She has authored or coauthored seven books, including The Cuban Missile Crisis and The Assassination of John F. Kennedy.

"A well-informed biography that presents its subject in a golden light." —Kirkus Reviews

"Time’s “Colonel Wonderful” receives a new biographical treatment in The Last American Hero, which positions him as an adventurer, a statesman, and a role model." —Foreword Reviews