Traitor King: The Scandalous Exile of the Duke & Duchess of Windsor (Hardcover) 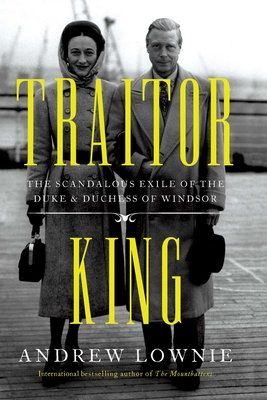 By Andrew Lownie
$32.00
Email or call for price

Drawing upon newly released archives, bestselling biographer Andrew Lownie tells the story of the Duke and Duchess of Windsor's glittering lives after Edward abdicated the throne—a world that was riddled with treachery and betrayal.

A Town & Country "Must Read Book"

11 December 1936. The King of England, Edward VIII, has given up his crown, foregoing his duty for the love of Wallis Simpson, an American divorcée. Their courtship has been dogged by controversy and scandal, but with Edward's abdication, they can live happily ever after.

But do they? Beginning this astonishing dual biography at the moment that most biographers turn away, bestselling historian Andrew Lownie reveals the dramatic lives of the Windsors post-abdication. This is a story of a royal shut out by his family and forced into exile; of the Nazi attempts to recruit the duke to their cause; and of why the duke, as Governor of the Bahamas, tried to shut down the investigation into the murder of a close friend. It is a story of a couple obsessed with their status, financially exploiting their position, all the while manipulating the media to portray themselves as victims.

The Duke and Duchess of Windsor were, in their day, the most glamorous exiles in the world, flitting from sumptuously appointed mansions in the south of France to luxurious residences in Palm Beach. But they were spoiled, selfish people, obsessed with their image, and revelling in adulterous affairs. Drawing upon previously unexplored archives, Lownie shows in dramatic fashion how their glittering world was riddled with treachery and betrayal—and why the royal family never forgave the duke for choosing love over duty.

Andrew Lownie was educated at Asheville School, North Carolina, and the universities of Cambridge and Edinburgh, where he took his doctorate. He was part of the six man team who set up the Spy Museum in Washington, DC, and he sits on the Advisory Committee of Biographers International Organization. He is the author of Stalin’s Englishman (St Martin’s Press) and The Mountbattens (Pegasus Books) and is a reviewer for the Wall Street Journal.

“This readable, damning synthesis confirms that Edward’s abdication was the free world’s good fortune.‘It’s a shame he is no longer king,’ Goebbels wrote in his diary. ‘With him we would have entered into an alliance.’”—
— Dominic Green

"Darkly compelling. Hundreds of eye-popping details. Gripping though it is, this is an unrelentingly damning portrait of the Windsors.”
— The Daily Mail

“Compelling. A devastating portrait of the duke and duchess. A timely point of comparison when set against the ongoing trials and tribulations of the House of Windsor.”
— The Tablet

"Briskly written and compulsively readable. Does Andrew Lownie persuade me that it is worth telling the story again, and that he has made out the case for his unforgiving title? The answer is an unambiguous yes.”
— A.N. Wilson

“Compelling and conclusive. Wallis Simpson performed a great service to the Windsors by removing Edward VIII from the throne. As Andrew Lownie definitively proves, he was totally unfit to be king and his willingness to be Hitler’s satrap would have finished the monarchy.”
— Clive Irving, bestselling author of The Last Queen

"Andrew Lownie sets out to revise the revisionists, and he does so convincingly. It is impossible not to be convinced by the evidence Lownie produces. Lownie reveals Edward not as a dupe of the Nazis, but an active and culpable collaborator. The list of individuals interviewed and archives consulted is formidable. The more impressive then, that this is a wonderfully readable and succinct story [with] riveting detail about the sheer awfulness, the anomie of the Windsors' postwar life.”
— BBC History Magazine

"Lownie has uncovered an array of new sources regarding the Duke and Duchess of Windsor, and he exhibits a sovereign command of the existing biographies. Tackling the most sensitive subjects—the Duke and Duchess’ sexuality, their pro-Nazi views, their problematic behavior during the war, and the complicated nature of their relationship—Lownie has painted the most convincing portrait of the couple to date. The results are fascinating.”
— Jonathan Petropoulos, author of Royals and the Reich: The Princes von Hessen in Nazi Germany

“Lownie gathers convincing evidence of Edward’s collaboration with Germany and amasses a wealth of new material, including intimate details about the Duchess’s affair with American socialite James Donahue. Royal watchers will be riveted.”
— Publishers Weekly

"Lownie’s well-researched and comprehensive book proves there’s more to learn about the couple. Readers will find not salacious gossip but careful analysis and an accurate portrait of an unpleasant, grasping, manipulative couple trying to find purpose in their lives. Edward later publicly renounced the worst Nazi offenses, but his friendships, comments, and antisemitism reveal another truth. Crisp prose, meticulous research, and careful objectivity make Lownie’s biography accessible to all readers."
— Library Journal