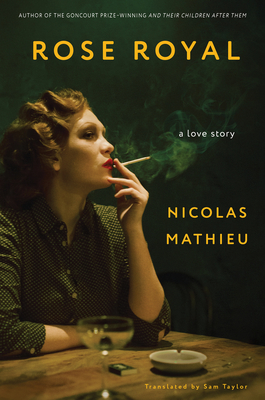 From the Goncourt Prize–winning author of And Their Children After Them, a devilishly smart noir novella that finds uncomfortable truths in the everyday about romance, violence, and women’s desire and desirability.

Nearing fifty, with a divorce and a string of other failed relationships behind her, Rose has given up on the idea of love, if not sex—though that always comes with risks. Determined not to let another man hurt her, she even ordered a .38 caliber handgun after an argument with her latest boyfriend almost turned violent. Now she carries it everywhere, just in case.

As if on autopilot, Rose spends her days at work and then at the Royal, a familiar haunt where she knocks back one drink after another, sometimes with her best friend Marie-Jeanne. And then a sudden accident brings Luc into the bar, and Rose decides to give love one last chance.

Nicolas Mathieu was born in Épinal, France, in 1978. His first novel, Aux animaux la guerre, was published in 2014 and adapted for television by Alain Tasma in 2018. He received the Prix Goncourt, France’s most prestigious literary award, in 2018 for his second novel, And Their Children After Them (Other Press, 2020). He lives in Nancy.

Sam Taylor is an award-winning literary translator and novelist. He has translated more than sixty books from French, including Laurent Binet’s HHhH and Leila Slimani’s The Perfect Nanny, and his four novels have been translated into ten languages. He was born in England, spent ten years in France, and now lives in the United States.

“This taut work has the power of a fable, with a cautionary moral about the violence lurking beneath every aspect of modern life.” —Rumaan Alam, New York Times bestselling author of Leave the World Behind

“A searing, unflinching portrait of a woman’s life in free fall. Rose Royal is a dark gem.” —Elizabeth Hand, author of Generation Loss and Curious Toys

“Reminiscent of Chopin’s The Awakening, Nicolas Mathieu has delivered a brief, fierce glimpse of lives compounded and compressed beneath the weight of patriarchy, where the control is as often mental as physical and the violence is as much silent as deafening.” —David Joy, author of When These Mountains Burn

Praise for And Their Children After Them:

“[A] page-turner…It is easy to see why this novel, which arrives just on time and contains the secret history of the current political upheaval, would find such critical acclaim…I couldn’t put the book down. I didn’t want it to end.” —New York Times Book Review

“A novel that is delightfully detached and disabused, and yet knows when to let down its guard and be moving.” —Los Angeles Review of Books

“A masterly, far-reaching exploration of a de-industrialized country which ‘treated its families like a minor footnote to society’…And Their Children After Them invites comparison with the great realist and naturalist writers of the French nineteenth century.” —Times Literary Supplement