Sidney Chambers and the Persistence of Love: Grantchester Mysteries 6 (Paperback) 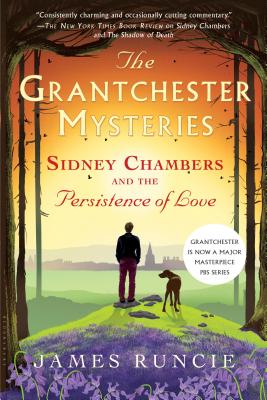 The sixth installment in the Grantchester Mysteries series, now a major PBS television series as well.

The sixth book in the James Runcie’s much-loved Granchester Mystery series, which has been adapted for Masterpiece's Grantchester starring James Norton, sees full-time priest, part-time detective Sidney Chambers plunged back into sleuthing when he discovers a body in a bluebell wood.

It is May 1971 and the Cambridgeshire countryside is bursting into summer. Attending to his paternal duties, Archdeacon Sidney Chambers is walking in the woods with his daughter Anna and their aging Labrador, Byron, when they stumble upon a body. Beside the dead man lies a basket of wild flowers, all poisonous. And so it is that Sidney is thrust into another murder investigation, entering a world of hippies, folk singers, and psychedelic plants, where love triangles and permissive behavior seem to hide something darker.

Despite the tranquil appearance of the Diocese of Ely, there is much to keep Sidney and his old friend, Detective Inspector Geordie Keating, as busy as ever. An historic religious text vanishes from a Cambridge college; Sidney’s former flame, Amanda Richmond, gets a whiff of art-world corruption; and his nephew disappears in the long, hot summer of 1976.

Meanwhile, Sidney comes face to face with the divine mysteries of life and love while wrestling with earthly problems--from parish scandals and an alarmingly progressive new secretary to his own domestic misdemeanors, the challenges of parenthood and a great loss.

"James Runcie has written the coziest of cozy murder mysteries. Taken individually, each of these clerical whodunits poses a clever puzzle for armchair detectives. Viewed as a collective study of British life as it was lived when Elizabeth II first ascended the throne, these stories present a consistently charming and occasionally cutting commentary on 'a postwar landscape full of industry, promise and concrete." - Marilyn Stasio, New York Times Book Review

"The author is a master wordsmith, writing in delicate, lyrical prose . . . Readers definitely are in for a treat when they meet this gentlemanly but worldly man of the cloth. I cannot but hope there are many more cases in his future." - Mystery Scene

"Chambers turns out to be a winning clergyman-sleuth, and Runcie's literary authority is repeatedly demonstrated in the construction of his elegant tales . . . There is no denying the winning charm of these artfully fashioned mysteries." - Independent