The Story of Doctor Dolittle (Hardcover) 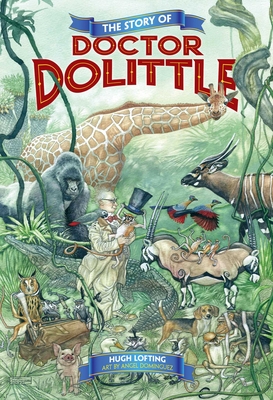 Doctor Dolittle has been beloved by children for more a century and will soon come to life again in the new movie, The Voyages of Doctor Dolittle.

The famous doctor who can speak to animals first appeared in Hugh Lofting’s letters to his children during World War I and then later commercially in The Story of Doctor Dolittle, the first book in Lofting’s popular children’s book series.

Written and illustrated by Lofting himself, The Story of Doctor Dolittle follows John Dolittle and his misadventures with a crew of animals that he befriends. After learning he can speak to animals and he transitions from human medicine to veterinary practice, he loses most of his income and human patients. However, word in the animal kingdom spreads of this doctor with an extraordinary gift. Animals travel from far and wide to visit the doctor’s practice and receive treatment for their ailments.

After losing the majority of his wealth, the doctor receives word that an epidemic among monkeys is spreading throughout Africa and makes the voyage to confront the plague-ridden continent. Upon being shipwrecked with his animal crew, a slew of tribulations and adventures ensue in a classic story that has captivated readers young and old for nearly a century.

Hugh Lofting (January 1886&ndash;September 1947) was a British author who created the beloved and timeless character of Doctor Dolittle. His stories have inspired several major motion pictures over the last sixty years, and many household names&mdash;including Rex Harrison, Eddie Murphy, and Robert Downey Jr.&mdash;have taken on the titular role. He is also the author of several other books for children.

Ángel Domínguez was born in the Basque Country in 1953. He is an award-winning illustrator of more than twenty books and is known throughout Spain. His lavish work has already been compared to some of the greatest illustrators of the past century, including one of his inspirations, Arthur Rackham. Ángel’s art has graced postage stamps, magazine illustrations, stationary, postcards, earthenware, and more. Notable among his work is “The King’s Gift,” which he illustrated specifically for Queen Rania of Jordan in 2000. The art in The Jungle Book won the CCEI Award in Spain for best illustrated book. He lives with his wife in Laredo, Spain.