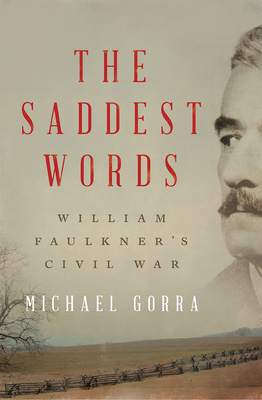 How do we read William Faulkner in the twenty-first century? asks Michael Gorra, in this reconsideration of Faulkner's life and legacy.

William Faulkner, one of America’s most iconic writers, is an author who defies easy interpretation. Born in 1897 in Mississippi, Faulkner wrote such classic novels as Absolom, Absolom! and The Sound and The Fury, creating in Yoknapatawpha county one of the most memorable gallery of characters ever assembled in American literature. Yet, as acclaimed literary critic Michael Gorra explains, Faulkner has sustained justified criticism for his failures of racial nuance—his ventriloquism of black characters and his rendering of race relations in a largely unreconstructed South—demanding that we reevaluate the Nobel laureate’s life and legacy in the twenty-first century, as we reexamine the junctures of race and literature in works that once rested firmly in the American canon.

Interweaving biography, literary criticism, and rich travelogue, The Saddest Words argues that even despite these contradictions—and perhaps because of them—William Faulkner still needs to be read, and even more, remains central to understanding the contradictions inherent in the American experience itself. Evoking Faulkner’s biography and his literary characters, Gorra illuminates what Faulkner maintained was “the South’s curse and its separate destiny,” a class and racial system built on slavery that was devastated during the Civil War and was reimagined thereafter through the South’s revanchism. Driven by currents of violence, a “Lost Cause” romanticism not only defined Faulkner’s twentieth century but now even our own age.

Through Gorra’s critical lens, Faulkner’s mythic Yoknapatawpha County comes alive as his imagined land finds itself entwined in America’s history, the characters wrestling with the ghosts of a past that refuses to stay buried, stuck in an unending cycle between those two saddest words, “was” and “again.” Upending previous critical traditions, The Saddest Words returns Faulkner to his sociopolitical context, revealing the civil war within him and proving that “the real war lies not only in the physical combat, but also in the war after the war, the war over its memory and meaning.”

Filled with vignettes of Civil War battles and generals, vivid scenes from Gorra’s travels through the South—including Faulkner’s Oxford, Mississippi—and commentaries on Faulkner’s fiction, The Saddest Words is a mesmerizing work of literary thought that recontextualizes Faulkner in light of the most plangent cultural issues facing America today.

The author of Portrait of Novel, a finalist for the Pulitzer Prize, Michael Gorra is the Mary Augusta Jordan Professor of English Language and Literature at Smith College and the editor of the Norton Critical Editions of As I Lay Dying and The Sound and the Fury.

Spectacular.... Surely among the most dexterous, dynamic, and consistently surprising studies ever written about an English-language novelist.... This is surely the first account of Faulkner’s work that provides a systematic reading of Confederate historiography—the version that Faulkner would have imbibed growing up. And yet The Saddest Words, for all its peculiar accents, also serves as a kind of one-stop-Faulkner-shop.... At once diligent and path-breaking, focused and multifactorial, The Saddest Words rivals Joseph Blotner’s single-volume Faulkner and Philip Weinstein’s terser critical biography, Becoming Faulkner (2009), as the first book on this subject to which newcomers might wish to turn..... A master class.

Gorra’s well-conceived, exhaustively researched book probes history’s refusals... Rich in insight... Timely and essential as we confront, once again, the question of who is a citizen and who among us should enjoy its privileges.
— Ayana Mathis - New York Times Book Review

Michael Gorra, an English professor at Smith, believes Faulkner to be the most important novelist of the 20th century. In his rich, complex, and eloquent new book, The Saddest Words: William Faulkner’s Civil War, he makes the case for how and why to read Faulkner in the 21st by revisiting his fiction through the lens of the Civil War, 'the central quarrel of our nation’s history.' In setting out to explore what Faulkner can tell us about the Civil War and what the war can tell us about Faulkner, Gorra engages as both historian and literary critic. But he also writes, he confesses, as an 'act of citizenship.'

Eloquent analysis. . . . Graceful. . . . A nimble hybrid that blends literary analyses with history, biography, and personal narrative. . . . [Gorra] movingly narrates the debacles at Bull Run and Gettysburg and effortlessly slides from astute analyses of Faulkner’s best stories, like ‘Mountain Victory,’ to such novels as The Sound and the Fury, The Unvanquished (1938), and Go Down, Moses (1942).”

Michael Gorra’s provocative and engrossing new book, The Saddest Words, [is] an entry point into one of the secret themes of Faulkner’s oeuvre: the Civil War, and the collective madness that underlay the Southern resistance to abolition.

Powerful... Mr. Gorra demonstrates convincingly that this unshakable past for Faulkner came increasingly to involve race.... For Mr. Gorra, Faulkner’s fiction should be read these days for 'the drama and struggle and paradox and power of his attempt to work through our history, to wrestle or rescue it into meaning.' Reading Faulkner today we discover just how much imagination and courage can be required to face the past.
— Randall Fuller - Wall Street Journal

Faulkner’s enduring, ubiquitous quote that ‘the past is never dead’ might be a fitting epitaph for this new book. In this timely re-examination, Gorra considers how Faulkner should be read in the 21st century, with a focus on the depiction of Black people and racism in his fiction.
— Joumana Khatib - New York Times

A magisterial, multidisciplinary study of Faulkner that shakes the dust off his canonization.
— Kirkus Reviews [starred review]

As esteemed literary scholar Gorra informs us in this transcendent study, European audiences had long considered Faulkner one of the leading modernists . . . Gorra expertly mines his own deep reading of the Faulkner oeuvre to serve as our Virgil and guide us through an exploration of how the Civil War influenced Faulkner’s work and how, in turn, Faulkner’s writing helped shape modern literature. Gorra adroitly and poignantly portrays Faulkner at war with himself, juxtaposed and entwined with the history of a cleaved nation, to provide a compelling and necessary reexamination of a towering literary figure.
— Bill Kelly, Booklist, starred review

A meticulous work spanning literary criticism and history. As Gorra demonstrates, writing allowed Faulkner (1897–1962) to clarify his thinking and create characters who were often a reflection of himself, in many ways depicting the people of the South as unable to move on from the past. Biographical portions of the narrative show how the author’s own life mirrored these behaviors and sentiments, especially revealing is Gorra’s examination of Faulkner’s later career in Hollywood.?Faulkner once famously said, ‘The past is not dead. In fact, it’s not even past,’ and this exceptional study by Faulkner lends credence to these words. A worthy addition to Faulkner studies, and for larger Southern literature and Civil War collections.
— David Keymer - Library Journal

Michael Gorra is one of the finest critical minds at work in literature today, and this masterly reassessment of William Faulkner could not be more timely. Faulkner is a central figure in American fiction and, indeed, in American history, a voice as resonant in today's troubled world as it was in his own time. Gorra asks hard questions about the novelist and the man, and is unflinching in answering them. This is a momentous and thrilling book.
— John Banville

The audacity of Michael Gorra’s The Saddest Words takes my breath away. Each of his bold wagers would be sufficient risk for most writers: treating all of Faulkner’s dazzling works as a single enormous book; using the Civil War to illuminate Faulkner’s work, and Faulkner, in turn, to illuminate that harrowing, never-quite-ended war; treating Faulkner’s very limitations as an unsparing key to our own enduring dilemmas. The rich weave of Gorra’s book, shuttling nimbly among biography, history, criticism, social commentary, and travel, is so complex that you think it couldn’t possibly yield a coherent pattern. And yet, the uncanny result of this perfectly pitched and exquisitely written book is that Faulkner, that multifaceted genius, has never come across so clearly and so powerfully before.

— Christopher Benfey, author of If: The Untold Story of Kipling’s American Years

The Saddest Words confirms Michael Gorra’s place as one of the most creative and readable literary critics working today. . . . Provocative and poignant, it delivers a rich, discomfiting sense of why the legacies of the war, and of Faulkner himself, remain such unsettled topics in our nation still.

— Maya Jasanoff, author of The Dawn Watch: Joseph Conrad in a Global World

Where did William Faulkner go? The preeminent Southern novelist of the twentieth century, Faulkner was born and died in Jim Crow Mississippi. He was as preoccupied with race as most white Mississippians, and not in ways that make for a comfortable fit with our attitudes today. Michael Gorra’s The Saddest Words is a deeply learned, deeply felt, unflinching reconsideration of Faulkner, which ought to bring his life and work back into the twenty-first century conversation, where it deserves to be.

— Nicholas Lemann, author of Transaction Man: The Rise of the Deal and the Decline of the American Dream