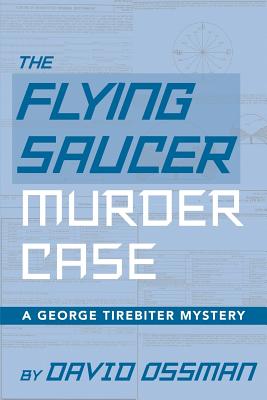 George Tirebiter, a 1940's radio and movie actor, was falsely blacklisted as a Red, but has continued working in the movie business (under various assumed names), as a sci-fi story and ad lib dialogue writer. In 1953, he owns the modest Rose-Bud Bungalow Court near USC and looks after his tenants.

The Rose-Bud has ten little bungalows, each with its own surprise, including an electrified chair in Number 3, a tranquil corpse in Number 7, a seductive nude model in Number 2, and George, the amateur sleuth himself, in Number 1, just across the way from the appealing TV producer in Number 10.

David Ossman has chronicled the Hollywood adventures of George Tirebiter since George's debut in 1970 as a character on The Firesign Theatre's third hit Columbia comedy album Don't Crush That Dwarf, Hand Me The Pliers. George ran (in person) for U.S. Vice President on the Surrealist Party ticket in 1976, starred in The Ronald Reagan Murder Case, a mystery thriller set in the Golden Age of Radio, and is featured in Ossman's memoir, Dr. Firesign's Follies. Ossman's new memoir, Fighting Clowns of Hollywood and Screenplay , collecting two unproduced Firesign feature films, "Odyssey" and "Saucer " with the story behind "Zachariah," plus three additional collections of Firesign Theatre stage and radio scripts are all Bear Manor books.