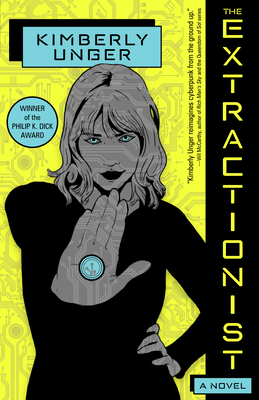 In her breakout technothriller, virtual reality expert Kimberly Unger has created the iconic, badass, cyberpunk heroine that you desperately need: Eliza McKay. McKay is disgraced underground hacker who is just trying to take back her career one dangerous job at a time. But when her latest contract throws her into the middle of a corporate power struggle, she finds herself fighting for her life in both the real and digital worlds. "Cyberpunk fans won't want to miss this."
--Publishers Weekly Eliza McKay is, by extreme necessity, a low-profile Extractionist. McKay is an expert in the virtual reality space where minds are uploaded as digital personas. When rich or important people get stuck in the Swim for reasons that are sleazy, illegal, or merely unlucky--it's her job to quietly extract them. And McKay's job just got a lot more dangerous. After McKay repels an attack on her Swim persona, hired thugs break into her house to try to hack her cybernetic implants directly. Meanwhile, the corporate executive she was hired to rescue from VR space is surprisingly reluctant to be extracted. Something is lurking in the Swim, and some very powerful people will stop at nothing to keep it secret. This job might be the big break McKay has been waiting for to reboot her career--but only if she can survive long enough to beat the hackers at their own game. With The Extractionist, virtual reality and gaming expert Kimberly Unger (Nucleation) has created an unforgettable cyberplayground where the rich still make their own rules, but a skilled operator remains the wildcard.

Kimberly Unger is the accliamed author of the virtual reality science-fiction thriller Nucleation. Unger made her first videogame back when the 80-column card was the new hot thing, and followed that up with degrees in English/Writing from UC Davis and Illustration from the Art Center College of Design. Nowadays she produces virtual reality narrative-games, lectures on the intersection of art and code for UCSC's master's program, and writes science fiction about how all these app-driven superpowers are going to change the human race. (Tl;dr - Unger writes about fast robots, big explosions, and space things.) Kimberly Unger lives in the San Francisco Bay Area, where she works in the future of VR on the Oculus platform.