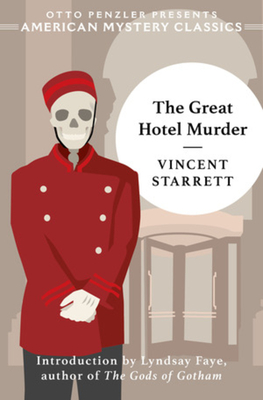 In a grand Chicago hotel, a mysterious death sets a puzzling whodunnit in motion

When a New York banker is discovered dead from an apparent morphine overdose in a Chicago hotel, the circumstances surrounding his untimely end are suspicious to say the least. The dead man had switched rooms the night before with a stranger he met and drank with in the hotel bar. And before that, he’d registered under a fake name at the hotel, told his drinking companion a fake story about his visit to the Windy City, and seemingly made no effort to contact the actress, performing in a local show, to whom he was married. All of which is more than enough to raise eyebrows among those who discovered the body.

Enter theatre critic and amateur sleuth Riley Blackwood, a friend of the hotel’s owner, who endeavors to untangle this puzzling tale as discreetly as possible. But when another detective working the case, whose patron is unknown, is thrown from a yacht deck during a party by an equally unknown assailant, the investigation makes a splash among Chicago society. And then several of the possible suspects skip town, leaving Blackwood struggling to determine their guilt or innocence—and their whereabouts.

Reissued for the first time in over eighty years, The Great Hotel Murder is a devilishly complex whodunnit with a classical aristocratic setting, sure to please Golden Age mystery fans of all stripes. In 1935, the story was adapted for a film of the same name.

Vincent Starrett (1886–1974) was a Chicago journalist who became one of the world’s foremost experts on Sherlock Holmes. A books columnist for the Chicago Tribune, he also wrote biographies of authors such as Robert Louis Stevenson and Ambrose Bierce, various books on books and book collecting, plus Sherlockian pastiches and numerous short stories and novels. A founding member of the Baker Street Irregulars, he is perhaps known best today for The Private Life of Sherlock Holmes, an imaginative biography of the great detective.

Lyndsay Faye is the author of six critically acclaimed books: The Paragon Hotel; Jane Steele, which was nominated for an Edgar for Best Novel; Dust and Shadow, a Sherlock Holmes pastiche; The Gods of Gotham, also Edgar-nominated; Seven for a Secret; and The Fatal Flame. She has also published numerous short stories featuring the Holmes character, several of which were collected in 2017’s The Whole Art of Detection. She lives in Queens.