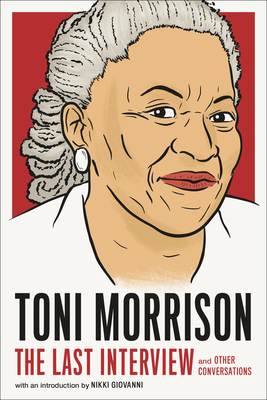 By MELVILLE HOUSE (Series edited by), Nikki Giovanni (Introduction by)
$16.99

“Knowledge is what’s important, you know?  Not the erasure, but the confrontation of it.” — TONI MORRISON

In this wide-ranging collection of thought-provoking interviews — including her first and last — Toni Morrison (whom President Barrack Obama called a “national treasure”) details not only her writing life, but also her other careers as a teacher, and as a publisher, as well as the gripping story of her family. In fact, Morrison reveals here that her Nobel Prize-winning novels, such as Beloved and Song of Solomon, were born out of her family’s stories — such as those of her great-grandmother, born a slave, or her father, escaping the lynch mobs of the South. With an introduction by her close friend, poet Nikki Giovani, Morrison hereby weaves yet another fascinating and inspiring narrative — that of herself.

Toni Morrison was born in Lorain, Ohio, in 1931. After graduating from Howard University, and getting a masters at Cornell University, she became an English professor at Texas Southern University. When her marriage to Harold Morrison broke up in 1964, leaving her with their two sons, she got a job at Random House as the company's first African-American editor. She would work with many notable authors, including Angela Davis, Muhammad Ali, and Toni Cade Bambara. In 1970 Morrison published her own first novel, The Bluest Eye, which was extremely well-received. Her third novel, Song of Solomon, won the National Book Critics Circle Award. She would go on to write several more novels--perhaps most notably, Beloved--as well as plays and poetry, and was awarded the Noble Prize in Literature IN 1993. She died in 2019.

Poet and activist Nikki Giovanni first came to fame as one of the founders of the Black Arts Movement in the 1960s. The author of numerous books of poetry as well as several children's books, she has won numerous awards, including a Grammy nomination for a POETRY record. One of Oprah Winfrey's 25 "Living Legends," Giovanni is University Distinguished Professor at Virginia Tech.

“Her writing was a beautiful, meaningful challenge to our conscience and our moral imagination.” —Barack Obama

"She was our conscience. Our seer. Our truth-teller. She was a magician with language, who understood the Power of words. She used them to roil us, to wake us, to educate us and help us grapple with our deepest wounds and try to comprehend them." —Oprah Winfrey

“Morrison’s characters live with me the way that biblical figures were always in the back of my grandmother’s mind when she needed to make a point.” —Tayari Jones

“She wrote about what was difficult and what was necessary and in doing so she unearthed for a generation of people a kind of redemption, a kind of relief.” — Chimamanda Ngozi Adichie