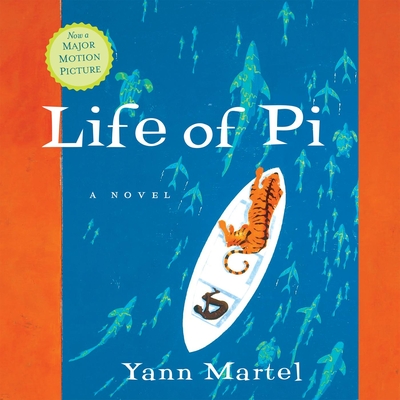 By Yann Martel, Jeff Woodman (Read by), Alexander Marshall (Read by)
$29.95
Email or call for price

Martel's novel tells the story of Pi—short for Piscine—an unusual boy raised in a zoo in India. Pi's father decides to move the family to live in Canada and sell the animals to the great zoos of America. The ship taking them across the Pacific sinks and Pi finds himself the sole human survivor on a lifeboat with a hyena, an orangutan, a zebra with a broken leg and Bengal tiger called Richard Parker. Life of Pi brings together many themes including religion, zoology, fear, and sheer tenacity. This is a funny, wise, and highly original look at what it means to be human.

YANN MARTEL was born in Spain in 1963 to diplomat parents. He grew up in Alaska, Canada, Costa Rica, France, and Mexico before settling in Montreal. His novel Life of Pi won the Booker Prize.

JEFF WOODMAN originated the title role in Tennessee Williams' "The Notebook of Trigorin" and won the san Francisco Critics' circle Award for his performance in "an Ideal Husband" In addition to numerous Off-Broadway credits, his TV appearances include Law & Order, Sex and the City, and Cosby. His more than 200 audiobook narrations has earned him numerous awards, including a People magazine "Annual Top Five" citation and a spot in AudioFile magazine's "Top Fifty Voices of the Century".

“Woodman reads with an almost childlike delicacy and simplicity that lend credibility to the wisdom implicit in this fanciful tale. . . . His range is astounding. . . . Both story and reading delight on every level.”
—AudioFile [Earphones Award Winner]