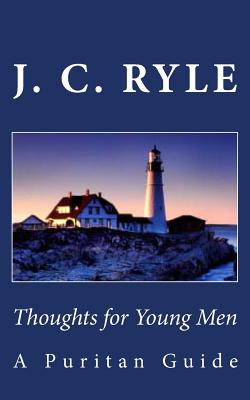 By J. C. Ryle
Please email or call us for pricing on this book.

"Thoughts for Young Men," by J. C. Ryle, is a short yet passionate appeal that, a hundred years after it was written, remains relevant for today. Replete with warnings, exhortations, and instruction about this life's many trials, temptations, and common pitfalls, "Thoughts for Young Men" is biblical, practical, timeless, and wise. Ryle covers four great temptations that plague most young men: sloth, lust, love of pleasure, and peer pressure. One of the last great Puritans, Ryle tackles each subject with unsurpassed tenderness and tact. Readers will chuckle at some of the exhortations to stay away from books and newspapers that lead to sin. If only Ryle could see us now, with cable TV and the Internet. Ryle's advice will help any young man to live a more obedient, full life. "Thoughts for Young Men" is an excellent book for adolescent and teen boys to read. It encourages them to choose the high path of integrity rather than to yield to the many temptations to stray from that path. J. C. Ryle's style is one of a passionate appeal based on solid logic and the truth of the Scriptures.

John Charles Ryle (1816-1900) was the first Anglican bishop of Liverpool. Ryle was born at Macclesfield, and was educated at Eton and at Christ Church, Oxford, where he was Craven Scholar in 1836. After holding a curacy at Exbury in Hampshire, he became rector of St Thomas's, Winchester (1843), rector of Helmingham, Suffolk (1844), vicar of Stradbroke (1861), honorary canon of Norwich (1872), and dean of Salisbury (1880). However before taking the latter office, he was advanced to the new see of Liverpool, where he remained until his resignation, which took place three months before his death at Lowestoft. His appointment to Liverpool was at the recommendation of the outgoing Prime Minister Benjamin Disraeli. Ryle was a strong supporter of the evangelical school and a critic of Ritualism. He was a writer, pastor and an evangelical preacher. Among his longer works are Christian Leaders of the Eighteenth Century (1869), Expository Thoughts on the Gospels (7 vols, 1856-69), Principles for Churchmen (1884). Ryle was an athlete who rowed and played Cricket for Oxford, where he took a first class degree in Greats and was offered a college fellowship (teaching position) which he declined. The son of a wealthy banker, he was destined for a career in politics before choosing a path of ordained ministry. While hearing Ephesians 2 read in church in 1838, he felt a spiritual awakening and was ordained by Bishop Sumner at Winchester in 1842. For 38 years he was a parish vicar, first at Helmingham and later at Stradbrooke, in Suffolk. He became a leader of the evangelical party in the Church of England and was noted for his doctrinal essays and polemical writings. In 1880, at age 64, he became the first bishop of Liverpool, at the recommendation of Prime Minister Benjamin Disraeli. He retired in 1900 at age 83 and died later the same year. He is buried in the All Saints' Church, Childwall, Liverpool. In his diocese, he formed a clergy pension fund for his diocese and built over forty churches. Controversially, he emphasized raising clergy salaries ahead of building a cathedral for his new diocese. Ryle was described as having a commanding presence and vigorous in advocating his principles albeit with a warm disposition. He was also credited with having success in evangelizing the blue collar community.