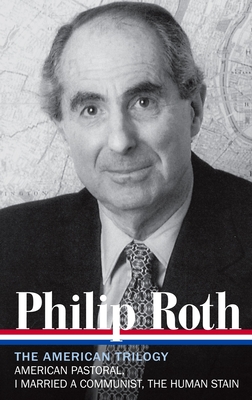 This is book number 7 in the Library of America Philip Roth Edition series.

Gathered together for the first time in this seventh volume of The Library of America's definitive edition of Philip Roth's collected works is the acclaimed American Trilogy, a major milestone in contemporary American literature. In American Pastoral (1997), Swede Levov is wrenched from the tranquility of his domestic life and into the turbulent 1960s by his cherished daughter, an antiwar terrorist. I Married a Communist (1998), a story of betrayal set in America's anti-Communist 1940s, recounts the rise and fall of radio star Ira Ringold, exposed by his wife as "an American taking his orders from Moscow." The Human Stain (2000) is set in 1998, when America is whipped into a frenzy of prurience by the impeachment of a president; in a small New England college town an aging classics professor, Coleman Silk, is forced to retire when his colleagues decree that he is a racist. The charge is a lie, but the real truth about Silk would astonish his most virulent accuser.

Philip Roth is the only living novelist whose works are being collected in the Library of America series. The nine-volume edition will be completed in 2013, for Roth's 80th birthday.

LIBRARY OF AMERICA is an independent nonprofit cultural organization founded in 1979 to preserve our nation’s literary heritage by publishing, and keeping permanently in print, America’s best and most significant writing. The Library of America series includes more than 300 volumes to date, authoritative editions that average 1,000 pages in length, feature cloth covers, sewn bindings, and ribbon markers, and are printed on premium acid-free paper that will last for centuries.

Philip Roth, acclaimed author of Portnoy's Complaint, The Human Stain and many other works of fiction, is the recipient of numerous awards, including the National Medal of Arts from the White House.