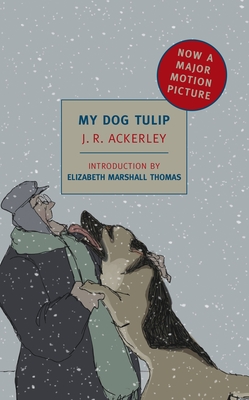 Heartwarming and profound, this account of one writer's relationship with his beloved German Shepherd is “one of the bonafide dog-lit classics” (New Yorker)

The distinguished British man of letters J. R. Ackerley hardly thought of himself as a dog lover when, well into middle age, he came into possession of a German Shepherd. To his surprise, she turned out to be the love of his life, the “ideal friend” he had been searching for in vain for years. My Dog Tulip is a bittersweet retrospective account of their sixteen-year companionship, as well as a profound and subtle meditation on the strangeness that lies at the heart of all relationships.

In vivid and sometimes startling detail, Ackerley tells of Tulip’s often erratic behavior and very canine tastes, and of his own fumbling but determined efforts to ensure for her an existence of perfect happiness.

My Dog Tulip was adapted for the screen as a major animated feature film with a cast that includes the voices of Christopher Plummer, Lynn Redgrave, and Isabella Rossellini. Heralded as “a stroke of genius" by New York Magazine and “the love story of the year” by Vanity Fair, it is a masterpiece of animal literature that is sure to touch the hearts of anyone who has found companionship with their own four-legged friend.

J. R. Ackerley (1896–1967) was for many years the literary editor of the BBC magazine The Listener. His works include three memoirs, Hindoo Holiday, My Dog Tulip, and My Father and Myself, and a novel, We Think The World of You (all available as New York Review Books).


Elizabeth Marshall Thomas’s most recent books are The Hidden Life of Dogs, The Social Lives of Dogs: The Grace of Canine Company, and Tamed and Untamed: Close Encounters of the Animal Kind.

“One of the greatest books ever written by anybody in the world.” —Truman Capote

“I remain an amused admirer of My Dog Tulip, partly because J. R. Ackerley tried to deliver the thoroughly physical world that dogs inhabit. It’s anthropomorphism in reverse, albeit with a human (and very British) narrator.” —Gail Caldwell, The New York Times Book Review

“One of the bona-fide dog-lit classics.” —The New Yorker

“This is one of the greatest masterpieces of animal literature.” —Christopher Isherwood

“Out of print for years, Tulip is now back to amaze, amuse, and somewhat dismay those lucky enough to receive her.” —Boston Globe

“I love this book because it shows respect and profound understanding of the animal on its own terms.” —Armistead Maupin

“[Ackerley] aimed to shock, and his success was heightened by the soapbubble sparkle and lightness of his prose.” —The New Criterion

“In its own quirky fashion, Ackerley’s wry valentine to his beloved pet is as much a book about the difficult art of living and loving as it is a dog story.” —Publishers Weekly