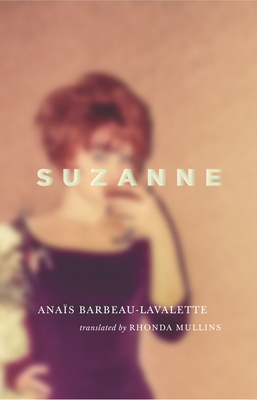 This is a fictional account of the author's grandmother, who abandoned her child in order to pursue the life and art she loved so much. It's poetic and fragmented, built from the scraps of information provided by a private investigator. What does it mean to be a mother, she asks, and how does that change what it means to be an artist or a woman? This reckoning with the past and family should be read by anyone who has ever dreamed of being something more.

Ana's Barbeau-Lavalette never knew her mother's mother. Curious to understand why her grandmother, Suzanne, a sometime painter and poet associated with Les Automatistes, a movement of dissident artists that included Paul- mile Borduas, abandoned her husband and young family, Barbeau-Lavalette hired a private detective to piece together Suzanne's life.

Suzanne, winner of the Prix des libraires du Qu bec and a bestseller in French, is a fictionalized account of Suzanne's life over eighty-five years, from Montreal to New York to Brussels, from lover to lover, through an abortion, alcoholism, Buddhism, and an asylum. It takes readers through the Great Depression, Qu bec's Quiet Revolution, women's liberation, and the American civil rights movement, offering a portrait of a volatile, fascinating woman on the margins of history. And it's a granddaughter's search for a past for herself, for understanding and forgiveness.

'It's about a nameless despair, an unbearable sadness. But it's also a reflection on what it means to be a mother, and an artist. Most of all, it's a magnificent novel.'

Ana's Barbeau-Lavalette is a Montreal-based author and director. She was named the 2012 Artist for Peace by the social justice organization Les Artistes Pour la Paix.

Rhonda Mullins is a writer and translator living in Montr al. She received the 2015 Governor General's Literary Award for Twenty-One Cardinals, her translation of Jocelyne Saucier's Les h ritiers de la mine.