The School that Escaped the Nazis: The True Story of the Schoolteacher Who Defied Hitler (Hardcover) 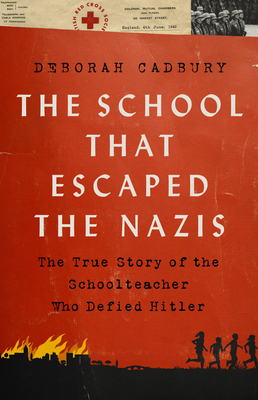 Named one of Book Riot's BEST BIOGRAPHIES OF 2022

In 1933, the same year Hitler came to power, schoolteacher Anna Essinger saved her small, progressive school from Nazi Germany. Anna had read Mein Kampf and knew the terrible danger that Hitler’s hate-fueled ideologies posed to her pupils, so she hatched a courageous and daring plan: to smuggle her school to the safety of England.

As the school she established in Kent, England, flourished despite the many challenges it faced, the news from her home country continued to darken. Anna watched as Europe slid toward war, with devastating consequences for the Jewish children left behind. In time, Anna would take in orphans who had given up all hope: the survivors of unimaginable horrors. Anna’s school offered these scarred children the love and security they needed to rebuild their lives.

Featuring moving firsthand testimony from surviving pupils, and drawing from letters, diaries, and present-day interviews, The School that Escaped the Nazis is a dramatic human tale that offers a unique perspective on Nazi persecution and the Holocaust. It is also the story of one woman’s refusal to allow her belief in a better world to be overtaken by hatred and violence.

Deborah Cadbury is the author of eight acclaimed books, including Chocolate Wars; The Dinosaur Hunters; The Lost King of France and Seven Wonders of the Industrial World, for which her accompanying BBC series received a BAFTA nomination; and Princes at War. As a BBC TV producer and executive producer, she has won numerous international awards, including an Emmy. She lives in London.

“What gives this book its immediacy and freshness is the fact that Deborah Cadbury has spoken to so many of the witnesses to a phenomenal story. The woman who brought an entire school to Kent from Germany, and saved so many children from the Nazis, was a completely heroic figure. This story is an uplifting reminder of how courage, high virtue, and intelligence can overcome even the most appalling odds. At many points, with tearful eyes, I cheered—it is a book which stirs up deep emotion, and high admiration, for the author as well as its subject.”—A. N. Wilson, author of The Mystery of Charles Dickens

“Anna Essinger’s wartime school for Jewish refugees reminds us of the lifelong impact which one person’s compassion and imagination can make on others—even in the darkest of times. Cadbury’s story packs a real emotional punch.”—Caroline Shenton, author of National Treasures

“A stirring account of a German schoolteacher’s efforts to build an oasis for children fleeing the Nazi advance across Europe. . . .  Impressively researched and vividly told, this is a captivating portrait of courage and resilience in the face of unspeakable horror.”—Publishers Weekly

“Cadbury (Princes at War, 2015) tells the story of this remarkable school and its courageous leader as she details the lives of many of the children who made their way out of horror to a safe haven.”—Booklist

“Deborah Cadbury tells the story of Anna Essinger and her extraordinary school very well. To one pupil, who had witnessed shocking violence in Germany, Bunce Court seemed like ‘paradise’. Cadbury’s book shows just why he thought that.”—The Daily Mail

"In The School that Escaped the Nazis, the British author and BBC television producer, Deborah Cadbury, provides a persuasive portrait of Anna Essinger as a lesser known heroine of the Holocaust and someone who deserves broader recognition…With her mix of idealism, pragmatism, determination and hesed – the Hebrew word for loving kindness – Essinger continues to set a compassionate example as we go about healing the newest generation of traumatised youths…"—Wall Street Journal

“This is an atmospheric portrait of an inspiring moment in dark times.”—The Sydney Morning Herald

“[S]he does justice to this moving tale, whose narrative twists and turns and colorful characters would make a great movie.”—Forward

“This is a thrilling and fascinating biography readers will no doubt find inspirational.”—BookRiot, “Best Biographies of 2022”