The Mill on the Floss (Great Classics #52) (Paperback) 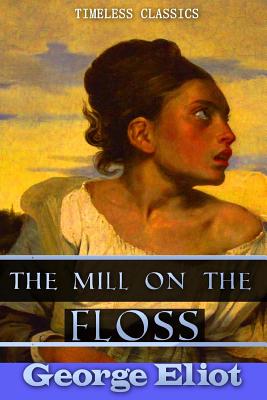 This is book number 52 in the Great Classics series.


Classics for Your Collection:
goo.gl/U80LCr
---------
Maggie Tulliver is the central character of the book. The story begins when she is 9 years old, 13 years into her parents' marriage. Her relationship with her older brother Tom, and her romantic relationships with Philip Wakem (a hunchbacked, sensitive, and intellectual friend) and with Stephen Guest (a vivacious young socialite in St. Ogg's and assumed fiance of Maggie's cousin Lucy Deane) constitute the most significant narrative threads.
Tom and Maggie have a close yet complex bond, which continues throughout the novel. Their relationship is colored by Maggie's desire to recapture the unconditional love her father provides before his death. Tom's pragmatic and reserved nature clashes with Maggie's idealism and fervor for intellectual gains and experience....
Maggie wants to save her family from financial ruin, but she's uneducated, so she doesn't know how. She wants to open herself up to friendship, but family grudges prevent her. She wants to follow the man she loves, but in doing so she will betray her best friends and be rejected entirely by her society.
The theme of the story is a struggle between passion (personified by Maggie) and duty (personified by her brother, Tom). Maggie absolutely lives and breathes for Tom's love and approval. However, if she follows her heart and her passions, her brother rejects her... in fact, he literally hates her (and tells her so). On the other hand, if she stifles her own desires and surrenders her very self to duty, she is miserable. And Tom still doesn't give her any credit.
The novel is also cool because it's sort of a novel about adultery without actually being about adultery. It feels very modern and unflinching, the more so because George Eliot actually spent much of her adult life in a happy but socially-isolating relationship out of wedlock, so she had perspective on The System.
The Mill on the Floss is moving and philosophical. Eliot does so many different things well; she's witty and detached, and then she writes a love scene that makes your knees go wobbly.
The nearby village of St Oggs and the River Floss in Lincolnshire are fictional.
Maggie Tulliver is one of the most engaging and endearing heroines that you will encounter in Victorian fiction.
Scroll Up and Get Your Copy
Timeless Classics for Your Bookshelf
Classic Books for Your Inspiration and Entertainment
Visit Us at:
goo.gl/0oisZU

George Eliot(1819-1880) In 1819, novelist George Eliot (nee Mary Ann Evans), was born at a farmstead in Nuneaton, Warwickshire, England, where her father was estate manager. Mary Ann, the youngest child and a favorite of her father's, received a good education for a young woman of her day. Influenced by a favorite governess, she became a religious evangelical as an adolescent. Her first published work was a religious poem. Through a family friend, she was exposed to Charles Hennell's An Inquiry into the Origins of Christianity. Unable to believe, she conscientiously gave up religion and stopped attending church. Her father shunned her, sending the broken-hearted young dependent to live with a sister until she promised to reexamine her feelings. Her intellectual views did not, however, change. She translated David Strauss' Das Leben Jesu, a monumental task, without signing her name to the 1846 work. After her father's death in 1849, Mary Ann traveled, then accepted an unpaid position with The Westminster Review. Despite a heavy workload, she translated Ludwig Feuerbach's The Essence of Christianity, the only book ever published under her real name. That year, the shy, respectable writer scandalized British society by sending notices to friends announcing she had entered a free "union" with George Henry Lewes, editor of The Leader, who was unable to divorce his first wife. They lived harmoniously together for the next 24 years, but suffered social ostracism and financial hardship. She became salaried and began writing essays and reviews for The Westminster Review. Renaming herself "Marian" in private life and adopting the nom de plume "George Eliot," she began her impressive fiction career, including: Adam Bede (1859), The Mill on the Floss (1860), Silas Marner (1861), Romola (1863), and Middlemarch (1871). Themes included her humanist vision and strong heroines. Her poem, "O May I Join the Choir Invisible" expressed her views about non-supernatural immortality: "O may I join the choir invisible/ Of those immortal dead who live again/ In minds made better by their presence. . ." D. 1880. Her 1872 work Middlemarch has been described by Martin Amis and Julian Barnes as the greatest novel in the English language.