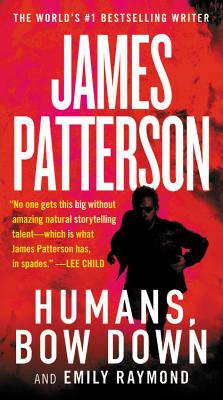 By James Patterson, Emily Raymond, Jill Dembowski (With), Alexander Ovchinnikov (Illustrator)
Please email or call us for pricing on this book.

In a world run by machines, humans are an endangered species -- and their only hope is a rebel warrior with nothing left to lose.
The Great War is over. The robots have won. The humans who survived have two choices: they can submit and serve the vicious rulers they created, or be banished to the Reserve, a desolate, unforgiving landscape where it's a crime just to be human. Following the orders of their soulless leader, the robots are planning to conquer humanity's last refuge and make all humans bow down.
The only thing more powerful than an enemy who feels nothing is a rebel warrior with a cause and nothing left to lose. Six is a feisty, determined woman whose parents were killed with the first shots of the war, and whose siblings lie rotting in prison. Her partner in crime is Dubs, the one person who respects authority even less than she does.
On the run for their lives after an attempted massacre, Six and Dubs are determined to save humanity before the robots wipe humans off the face of the earth. Pushed to the brink of survival, they discover a powerful secret that may set humanity free, but to succeed they'll have to trust the unlikeliest of allies . . . or be forced to bow down, once and for all.
Full of twists and turns from the world's #1 writer, Humans, Bow Down is an epic, dystopian, genre-bending thrill ride you'll never forget.

James Patterson received the Literarian Award for Outstanding Service to the American Literary Community at the 2015 National Book Awards. Patterson holds the Guinness World Record for the most #1 New York Times bestsellers. His books have sold more than 325 million copies worldwide.

"Behind all the noise and numbers, we shouldn't forget that no one gets this big without amazing natural storytelling talent--which is what James Patterson has in spades."
—Lee Child

"It's no mystery why James Patterson is the world's most popular thriller writer: his uncanny skill in creating living, breathing characters we truly feel for and seamless, lightning-fast plots. I do this for a living, and he still manages to keep me guessing from the first to last page. Simply put: Nobody does it better."
—Jeffery Deaver

"James Patterson is The Boss. End of."
—Ian Rankin

"The man is a master of his genre. We fans all have one wish for him: Write even faster."
—Larry King, USA Today