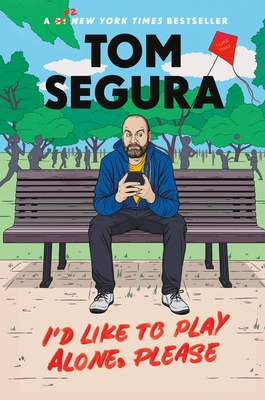 From Tom Segura, the massively successful stand-up comedian and co-host of chart-topping podcasts “2 Bears 1 Cave” and “Your Mom’s House,” hilarious real-life stories of parenting, celebrity encounters, youthful mistakes, misanthropy, and so much more.

Tom Segura is known for his twisted takes and irreverent comedic voice. But after a few years of crazy tours and churning out podcasts weekly, all while parenting two young children, he desperately needs a second to himself. It’s not that he hates his friends and family — he’s not a monster — he’s just beat, which is why his son’s (ruthless) first full sentence, “I’d like to play alone, please,” has since become his mantra.

In this collection of stories, Tom combines his signature curmudgeonly humor with a revealing look at some of the ridiculous situations that shaped him and the ludicrous characters who always seem to seek him out. The stories feature hilarious anecdotes about Tom's time on the road, including some surreal encounters with celebrities at airports; his unfiltered South American family; the trials and tribulations of parenting young children with bizarrely morbid interests; and, perhaps most memorably, experiences with his dad who, like any good Baby Boomer father, loves to talk about his bowel movements and share graphic Vietnam stories at inappropriate moments. All of this is enough to make anyone want some peace and quiet.

I’D LIKE TO PLAY ALONE, PLEASE will have readers laughing out loud and nodding in agreement with Segura's message: in a world where everyone is increasingly insane, sometimes you just need to be alone.

Tom Segura is a comedian originally from Cincinnati, Ohio. Well known for his Netflix specials Ball Hog, Disgraceful, Completely Normal, and Mostly Stories, Segura has also made feature film appearances that include Instant Family, Countdown, Flinch, and The Opening Act, among others. Tom is one of the top selling touring acts in the world, having sold hundreds of thousands of tickets on multiple international tours. Additionally, he co-hosts two of the most popular comedy podcasts, "Your Mom's House," with his wife, comedian Christina P. and "Two Bears, One Cave" with fellow comedian Bert Kreischer. Segura also producers multiple podcasts under his YMH Studios brand.

“I’d Like to Play Alone, Please is a stereotypically masculine tour de force with farts, football and a third thing starting with “f” that’s not fit to print, occasionally interrupted by completely disarming, heartfelt sentiments. Then followed by more poop jokes…The book is funny, surprising and even sweet at times."—Associated Press

"Segura’s quick wit and irreverent charm come across loud and clear in “I’d Like to Play Alone, Please,” a collection of essays that reads like a stand-up set deserving of a standing ovation."—The Los Angeles Times

"[L]augh out loud funny. . .Segura is impish and charming and clever and self-deprecating."—Forbes

“Tom Segura delivers a treatise that is as timely as it is thought provoking and…actually, he did something better…a book that’s ridiculously funny!!!! If you want to live inside the mind of one of the best comics out there, here’s your chance. I hear the audio version is for shit, though…”—Jon Stewart

“One of the funniest men I know has written an extremely funny book of stories that he's never told on stage.  There's lots to learn too, like how close Tom came to playing in the NFL (not very); or why sitting next to Mike Tyson on a plane is the most dangerous and exciting thing in world; or how Tom continues to be one of the greatest storytellers on the planet."—Ali Wong

“Tom Segura is a great guy, an amazing friend, and a limitless well of hilarious stories. He also has an appreciation for the absurdity of life that borders on mental illness. This book is a window into his beautifully f*cked-up mind, where some of the dumbest people and the ridiculous things they do take center stage, all masterfully animated by one of the best stand-up comics on earth. He’s my favorite kind of comic because his take on life is legitimately therapeutic. His enthusiasm for stupid sh*t is so contagious that it actually changes your mood and convinces you to join in on his way of seeing it. I love him to death, and his book is f*cking awesome.”—Joe Rogan

"[An] rrreverent collection of personal stories. . .Segura’s candor is undeniably entertaining. Fans will find this a riot."—Publishers Weekly

"While Segura’s off-color humor is not for everyone, his fans will doubtlessly enjoy both his essays and the included black-and-white photos. Often crude but undeniably funny."—Kirkus Reviews