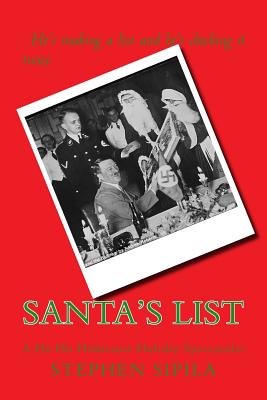 After his elves unionize against him, Santa Claus doesn't know how he is going to make enough toys for all the children of the world before Christmas time. He soon finds a solution when he is offered the opportunity to join the Nazi party and set up his workshop at Auschwitz and make use of the slave labor there. But as Santa Claus witnesses the horrors and atrocities of Auschwitz he begins to realize his own prejudice and inhumanity and starts to question whether the patron Saint of children should be running a death camp. Santa is a violent, womanizing drunk and drug addict with severe sexual issues and a bad attitude who has grown cynical about the holidays. Once his elves leave him, with the exception of his one frequently abused dwarf, Marvin, he sets out working at Auschwitz only to then learn a lesson from a bunch of German children who have befriended some escaped Jews that will teach Santa Claus the true meaning of tolerance and Christmas joy. This is basically a dark morbid comedy about what Santa Claus would do if he were a brutal Nazi running a death camp. Not for the easily offended or disgusted.

Stephen Sipila is an author of all things weird and wonderful including science fiction, fantasy, horror and bizarro. All things speculative and strange, as well as brutally offensive satire and dark humor.